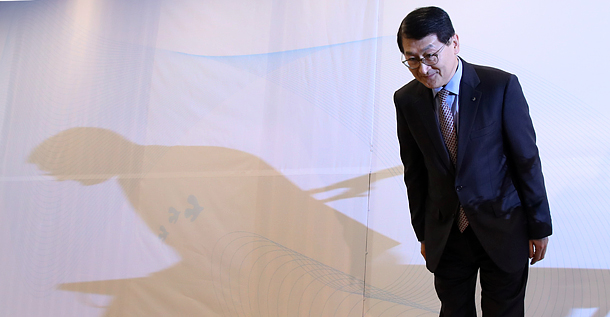 Shinhan Bank CEO Wi Sung-ho takes a bow at his first press conference as head of the banking unit of Shinhan Financial Group at the company’s headquarters in Seoul on Tuesday. [YONHAP

The new CEO of Shinhan Bank, the country’s largest bank by net profit, pledged to advance digital services and global expansion on Tuesday as the banking industry faces stiff competition on its home turf.

Wi Sung-ho, former chief executive of Shinhan Card, is aiming to increase the proportion of overseas business to 20 percent from the current 12 percent. In boosting its presence abroad, Shinhan will take a more proactive approach, he said.

“So far, the typical strategy was opening up some branches in different countries,” he said during a press briefing. “But we will now consider stock purchases of promising financial companies and mergers and acquisitions.”

He cited Indonesia, India and the United States as target markets, adding that business there is profitable as well as in the branches in Vietnam and Japan.

As for digitization, Wi stressed convergence and connectedness among platforms and industries, citing the era of the fourth industrial revolution. Still, he said that it will take a while to fully grasp the type of technology needed in the banking industry.

“In the card industry, digital platforms that facilitate payment is essential,” Wi said, “But the banking sector requires the services that encompass deposits, money transfer, currency exchanges and loans.

“I will look into the usage of banking apps to see which features are most used.”

Expectations for digital push are high because Wi is credited with bringing cutting-edge technologies and big data systems to Shinhan Card. He pioneered the deployment of big data to develop card products.

He touched on other issues including the direction of commissions.

After Citibank Korea said in December that it would impose a monthly fee on accounts with low balances, local banks are considering similar measures.

KB Kookmin, for instance, said that it is considering charging fees for customers who withdraw money at brick-and-mortar branches. Wi said that commission fees at local banks are lower than those of its peers abroad.

“We need to look through the issue with different aspects,” he said. “We also need to consider how many customers will depart from our bank if we instate such fees.”