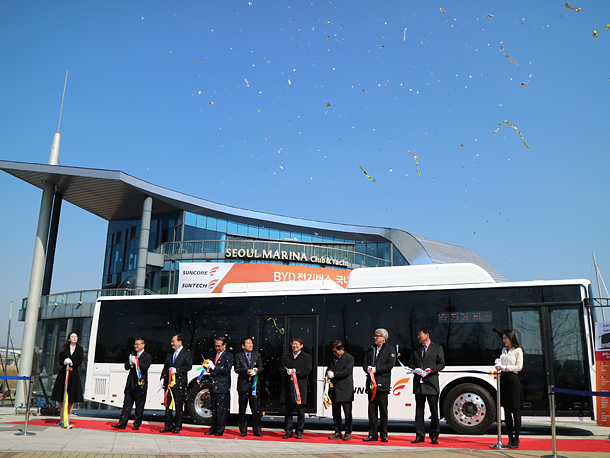 Officials from Suncore, the Ministry of Environment and local public transport companies at a launch event for the eBus-12, the Korean version of BYD’s K-9 bus. [SUNCORE]

BYD, a Chinese automaker specializing in eco-friendly cars, introduced its electric bus to the Korean market on Tuesday during a launch event in Yeouido, western Seoul.

Suncore, a Korean partner of BYD with rights to sell the eBus-12, a Korean version of BYD’s eco-friendly K-9 bus, said it purchased three eBus-12 models last year and will bring as many as 1,000 of them to Korea by 2018. BYD is currently a market leader in eco-friendly vehicles, even ahead of Tesla. Its major shareholders include Warren Buffett and Samsung.

“The eBus-12 can travel as far as 250 kilometers [155 miles] on a single charge in urban conditions, which is the longest traveling distance in the world officially,” said Kim Jin-ho, former chair of the Korean Joint Chiefs of Staff and now an adviser to Suncore.

The company said the bus has a competitive edge in terms of price and safety.

“BYD’s batteries can be charged more than 4,000 times, which means the batteries on its vehicles don’t have to be replaced for about 10 to 11 years under normal circumstances, which is similar to the average life of regular transit buses,” said Sage Lee, vice president of Suncore.

By comparison, lithium-ion batteries popularly used by electric carmakers can be charged up to 1,500 times before they go dead.

The bus uses a lithium iron phosphate battery that Suncore says can withstand temperatures of up to 350 degrees Celsius (662 degrees Fahrenheit), unlike lithium-ion batteries which can only survive up to 150 degrees Celsius.

The eBus-12 currently runs in 40 countries and 160 cities around the world, including New York City and Bonn. BYD has also introduced an electric double decker in London.

The company estimates that each eBus-12 can save public transport companies up to 450 million won ($390,000) over 10 years compared to regular diesel and compressed natural gas buses.

“We recently conducted a test run on Jeju Island’s steep and curvy Road 516, and the results looked solid,” Lee said. “Right now, we are in the process of obtaining approval from the Ministry of Environment.

A manager at Suncore said the company expects to be able to negotiate competitive prices with public transport companies after gaining financial support from the government.