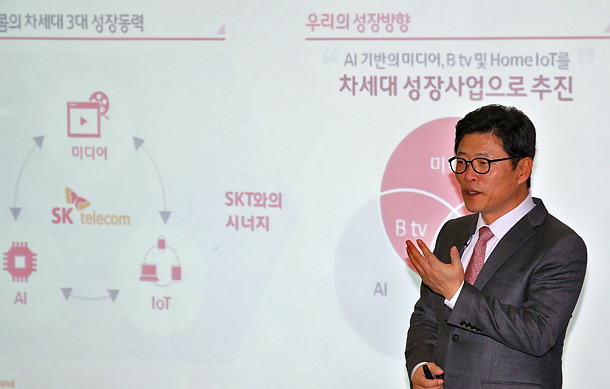 SK Broadband CEO Lee Hyung-hee outlines the company’s plan to become the country’s top media platform through aggressive investment during a press conference at the company’s headquarters in central Seoul on Tuesday. [YONHAP]

SK Broadband, an IPTV subsidiary of SK Telecom, unveiled ambitious plans to secure 27 million subscribers by 2021 with a revenue target of 4.5 trillion won ($3.92 billion) and the goal of becoming Korea’s top media platform.

To reach its goal, SK Broadband’s new CEO, Lee Hyung-hee, said the company would invest 5 trillion won over the next five years to improve the infrastructure and service coverage of its video streaming platforms during a press briefing Tuesday at the company’s headquarters in central Seoul.

It was Lee’s first official meeting with the media since becoming CEO this year. Before, he was head of SK Telecom’s mobile networks business.

“I have looked over the company’s past investment, which was roughly 600 billion won annually, and figured it wasn’t enough to essentially upgrade our service quality,” Lee said. “Starting with 850 billion won this year, we will make continuous investments to expand our service coverage in the nation and implement top-notch technologies like artificial intelligence and big data analysis to our platform.”

Since IPTV service is provided through the internet, service providers first need to secure network coverage. SK Broadband has been lacking in this field compared to competitors like KT. Enhancing the infrastructure for IPTV calls for heavy investment.

With the advent of artificial intelligence and big data in media consumption, Lee added that it was crucial for IPTV and media streaming services to be capable of content curation based on consumer preference. Since the company is affiliated with SK Telecom, which has developed its own voice-powered AI assistant Nugu, and SK C&C, which is working with IBM’s Watson to develop its own AI platform Abril, much collaboration is expected.

In line with its efforts to become a top media platform, SK Broadband is also planning to take its oksusu app global, citing an already saturated local market for streamed content. Lee, however, declined to disclose any further details.

Lee did say the company did not intend to operate oksusu on a paid-membership-only model like Netflix. Although SK Broadband is a platform provider and not a content creator, it will spend about 4 to 5 billion won on producing web dramas to run on oksusu this year.