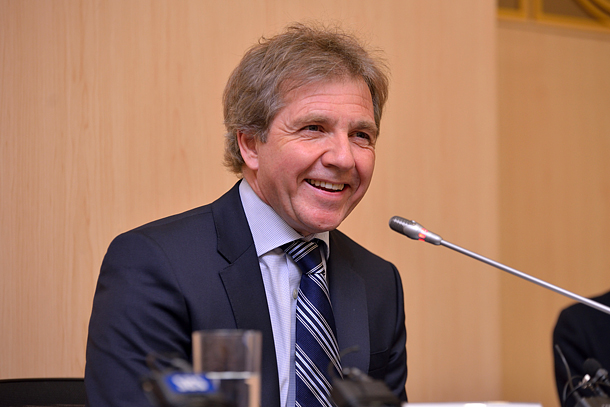 Swiss maestro Thierry Fischer, who was appointed the principal guest conductor of the Seoul Philharmonic Orchestra last September will hold his debut concert on Thursday at the Lotte Concert Hall, followed by another on Friday at the Seoul Arts Center.

“I was really happy to see the members of the Seoul Philharmonic Orchestra again after three years,” said Fischer during a press conference held Monday. “I think they kept their very high standard and over the past few days, we rehearsed two very different styles of music - the Brahms Symphony and Haydn Symphony - and I was very comforted and reassured with their artistic abilities.”

Fischer first met with the Seoul Philharmonic Orchestra in 2013, while former artistic director maestro Chung Myung-whun was heading the orchestra.

“We’ll be playing all the No. 1s from Haydn, Shostakovich and Brahms, because I really wanted to do my first official concert with the orchestra with my new role with a little symbol of No. 1,” he said. “It’s not to symbolize that I’m No.1, but No.1 to mark the beginning of a long journey with the orchestra.”