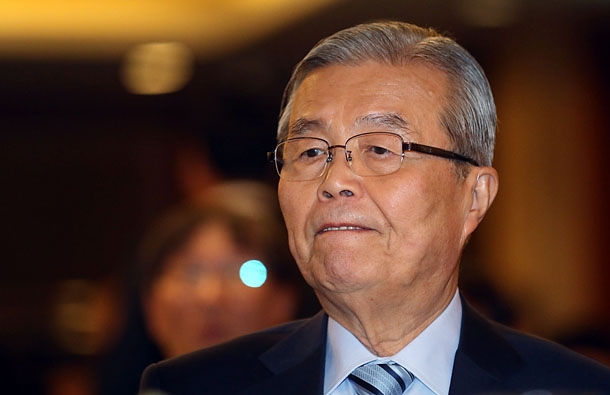 Kim Chong-in announced he will leave the Democratic Party on Tuesday, 14 months after joining the main opposition party, sparking speculation he will try to pitch a “big tent” party to challenge Moon Jae-in’s presidential race.

The former interim leader of the DP, who has been a vocal critic of frontrunning presidential contender Moon, told reporters he is leaving the party because he “has nothing in particular to do and is just taking up space.”

In January 2016, Kim was brought into the DP by Moon, the former chairman of the main opposition party, and became its interim leader ahead of a general election. At the time, the party was called the Minjoo Party.

Under Kim’s seven-month leadership, the Minjoo scored an upset in last year’s April general election, winning 123 seats - one more than the ruling party.

He said Tuesday that during the April 13 general elections, the party had asked his help to institute systematic changes - which haven’t come about.

“I have lost all my hopes for the current National Assembly,” he said. “All the parties call for reform legislation, but the reality is that there is no progress at all.”

Kim added, “In a situation where the president is impeached, it is the duty of the National Assembly to come up with an institutional strategy, but I concluded that the [DP] does not seem to have any aim and is not giving any significance to their position in the legislature.”

He said he would decide an exact date of departure later.

Kim said he has no concrete plans for the immediate future and does not plan to join another political party.

The 76-year-old economist has long promoted “economic democracy” in his career and was the architect of President Park Geun-hye’s victorious campaign in 2012.

Also on Tuesday, Kim held a meeting with Sohn Hak-kyu, a former Gyeonggi governor whose political bloc merged with the minor opposition People’s Party last month, at a restaurant in central Seoul.

Kim was said to have conveyed to Sohn his intention to leave the DP before the Constitutional Court rules in President Park Geun-hye’s impeachment trial. The two discussed constitutional amendments and economic democratization.

Sohn, a presidential hopeful, returned to the political arena in late October from a 25-month self-imposed exile in Gangjin, South Jeolla, after a humiliating defeat in a legislative by-election in Suwon, Gyeonggi, in July 2014. He left the DP that same month.

Whether Kim will erect a “big tent” new party remains ambiguous. He would likely be able to draw in Sohn, former Prime Minister Chung Un-chan and some members of the conservative Bareun Party as allies.

There also has been speculation that Kim could run for president as an independent.

Kim, a fifth-term lawmaker, would lose his seat in the National Assembly as a proportional representative when he leaves the DP.

When asked if he plans to run for president as an independent candidate, he replied, “Think as you will,” leaving doors open to the possibility.

One DP lawmaker close to Kim said, “It seems that he will stay out of political parties and end up trying to run.”

“Following the Constitutional Court’s decision, the interest of the people will go from [Moon Jae-in’s call for the] eradication of deep-rooted evil to what to do with the country, and from there, things are left to the political imagination,” said DP Rep. Choi Myung-ghil.

The problem is whether Kim will be able to garner enough influence ahead of the election.

Sohn said that Kim’s defection signifies that “a political big bang in March has been kicked off.”

The Bareun Party’s Kim Moo-sung, the former ruling party chairman, said, “Kim’s defection is due to disappointment with the pro-Moon forces. We share the same concern over constitutional reform, so when he makes a decision, we will naturally end up meeting.”