Korea could go to WTO over China’s retaliations

Korea could go to WTO over China’s retaliations 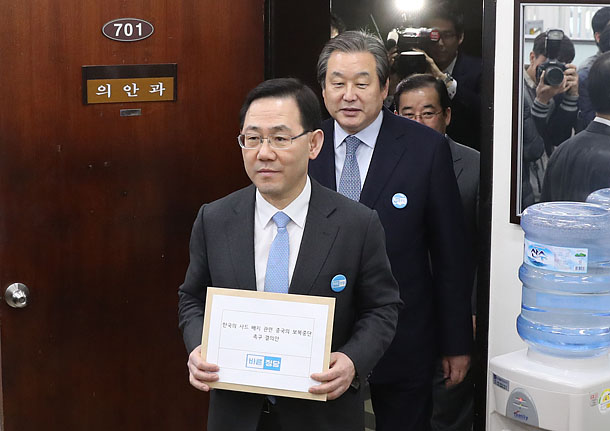 Lawmakers of the Bareun Party, a spinoff conservative party, submit a bill to the National Assembly floor on Tuesday to condemn China’s economic retaliations against South Korea over the deployment of U.S. antimissile system. [YONHAP]

The government and ruling party agreed Tuesday to consider complaining to the World Trade Organization (WTO) about China’s economic retaliations against Korea over its deployment of a U.S.-led antimissile system.

Ranking members of the ruling Liberty Korea Party and senior foreign affairs and security officials, including Foreign Minister Yun Byung-se and Vice Defense Minister Hwang In-moo, took part in a meeting about how to respond to Beijing’s retaliations for the deployment of the Terminal High Altitude Area Defense (Thaad) battery in Korea.

This includes a review of whether Beijing’s measures are in violation of the Korea-China free trade agreement (FTA), which entered into effect in December 2015.

Lee Hyun-jae, policy chief of the LKP, said, “Filing a complaint with the WTO will entail an active review of whether there is a violation of the Korea-China FTA, and we agreed to bolster efforts to minimize damages to local businesses.”

China joined the WTO in 2001, which was considered a milestone in its economic reforms and opening up of its economy.

Elements of the Thaad battery arrived in Korea Monday night, a week after the Ministry of National Defense secured a golf course in Seongju County, North Gyeongsang, in a land swap with Lotte Group, the nation’s fifth largest business group.

China is expected to take further retaliatory actions against Korean products and companies, in addition to its unofficial bans on Hallyu, or the Korean wave of pop culture, and unprecedented crackdown on Lotte Group affiliates.

In addition, Beijing ordered travel agencies last week to stop selling tour packages to Korea, which will have an impact on many local businesses.

The government will offer another 50 billion won ($43.6 million) in special loans to tourism-related companies and agencies on top of 70 billion won allocated to support the tourism industry. They also agreed to try to attract tourists from other countries such as India, Russia and Kazakhstan.

The Ministry of Trade, Industry and Energy said that it will provide state-backed loans to small and medium-sized companies hit by China’s retaliations.

The size of the fund will be up to 1 billion won and loans will be extended for as long as five years.

“China’s latest moves go against the reciprocity of the Korea-China free trade agreement,” Woo said, “[The ministry] hopes that China will restore efforts to make a better investment environment.”

Cosmetics companies have reported that the Chinese government keeps delaying the issuance of licenses required for import of their products. Companies that export cosmetics to China must acquire a so-called hygiene license from the China Food & Drug Administration to make sure the companies aren’t using banned chemicals.

The government and ruling party also called on China to respond to North Korea’s recent missile launches and the assassination of Kim Jong-nam, the estranged half brother of the regime’s leader, by supporting a UN Security Council joint statement as well as other countermeasures such as backing Washington’s move to reinstate Pyongyang on its list of state sponsors of terrorism.

Cho June-hyuck, a spokesman of the South Korean Ministry of Foreign Affairs, said in a briefing Tuesday, “We will continue to raise the issue of the injustice of China’s measures whenever there is an opportunity for dialogue.”

He added the government will engage in various diplomatic efforts to reach out to the international community, bolster the monitoring of trends within China and engage in a “government-wide organic response to minimize the damages to Korean companies.”

Cho said, “We will cooperate with related branches on whether there are violations of the WTO and the Korea-China FTA and respond according to international laws.”