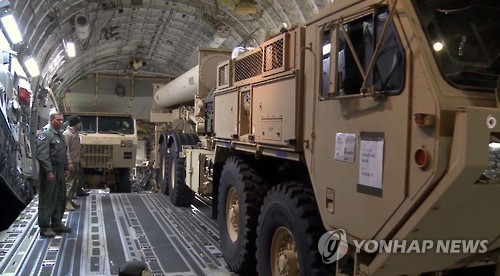 The deployment is months earlier than expected.

Two officials from the Ministry of National Defense said the equipment will be held at the U.S. army base and be moved to the Thaad battery's ultimate home in Seongju County, North Gyeongsang, after South Korean and U.S. military forces renovate the area.
The military officially declared the early deployment during a regular briefing Tuesday morning. It said the rest of the Thaad battery will arrive "within the earliest time possible."

North Korea's growing nuclear and missile provocations were the main reason Seoul and Washington decided to advance the deployment. The Thaad battery was expected to arrive between June and August. Officials refused to comment on why Monday was chosen for the arrival of the first components.

Asked whether the change of schedule had anything to do with North Korea's launch of four ballistic missiles early Monday morning, the officials said it was "nonsense" to think the South and the U.S. could speed through negotiations in such short notice.

South Korea's political calendar was also not an issue, they said, referring to the Constitutional Court’s upcoming ruling in the impeachment trial of President Park Geun-hye.

China, who along with Russia has vehemently opposed Thaad's deployment, was not notified of Monday's arrival in advance, according to South Korea's military. Beijing has yet to make an official statement on the matter.

China believes the Thaad battery is actually intended to spy on its airspace. Seoul and Washington maintain it is not.

While announcing the Thaad deployment, the U.S. Pacific Command said Tuesday, "North Korea's accelerating program of nuclear weapons tests and ballistic missile launches constitute a threat to international peace and security," and that Thaad will contribute to a "layered missile defense system."

The U.S. Pacific Command stressed that the antimissile system is a "strictly defensive capability" and "poses no threat to other countries in the region," in what appeared to be an effort to appease Beijing and Moscow.

The surprise announcement came a day after North Korea fired four missiles off its eastern coast Monday morning, three of which were suspected to have fallen into waters within Japan's exclusive economic zone.

South Korea's Joint Chiefs of Staff said they were working with their American counterparts for further analysis on what type of missiles they were, adding that chances were "low" any of them were intercontinental ballistic missiles.