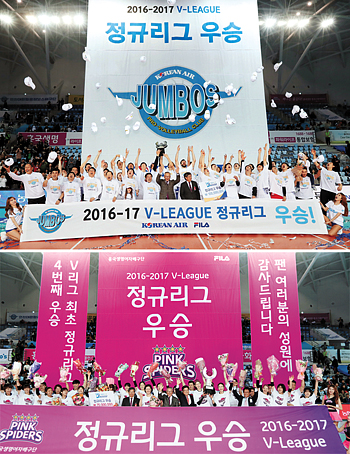 The Korean Air Jumbos of the men’s V-League, top, and the Heungkuk Life Insurance Pink Spiders of the women’s league, bottom, are the champions of the 2016-17 regular season. It’s the second win for the Pink Spiders and fourth for the Jumbos. [YONHAP]

Both of Incheon’s home volleyball teams, the Heungkuk Life Insurance Pink Spiders and the Korean Air Jumbos, were crowned regular season champions of the women’s and men’s V-League, respectively, on Tuesday at Gyeyang Gymnasium.

It’s a remarkable comeback for the Pink Spiders, who have struggled to get back on top after dominating the Korean women’s volleyball league in the mid-2000s. Much of that work can be credited to Park Mi-hee, who was hired as the team’s head coach in 2014.

With the win, Park has become the first female head coach in Korean professional sports to lead a season-topping team. “When I was first hired as head coach, I was overwhelmed because people said ‘first female’ with everything I did,” Park said after the game. “Now I can take the load off of my mind.”

After Incheon celebrated the Pink Spiders’ win, they had another chance to pop champagne when the Jumbos won their match against the Daejeon Samsung Bluefangs 3-2. With the win, the Jumbos earned two points to finish the season with 72. The team also improved its regular season record to 25 wins and 10 losses. The Jumbos’ win put them over the Cheonan Hyundai Capital Skywalkers, the second-ranked team in the V-League with 71 points.

Despite the strong lineup the Jumbos had with players like Han Sun-soo, Shin Young-soo and Kim Hak-min, they always seemed to struggle with teamwork.

Some of it could be attributed to the players’ strong personalities when it comes to play. With the last-minute addition of Park Ki-won as head coach, the team has strengthened its group dynamic.

“I’m glad we got to win at home,” Park said after the game. “Now we’ll work harder and try to win the championship series as well.”

The Jumbos have advanced to the championship series three times but never won.

The regular season win marks the Pink Spiders’ second and the Jumbo’s fourth in their history.