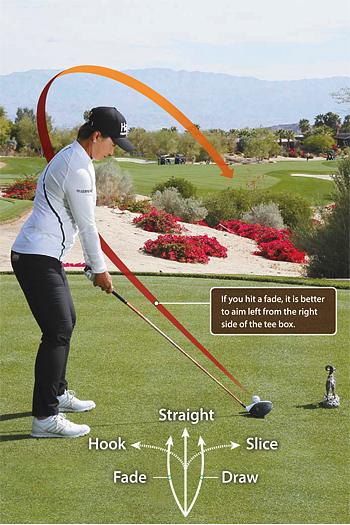 As all of you know, after winning the 2004 Michelob Ultra Open in Kingsmill, Virginia, I was in a slump for two years. I tried doing many different things to improve, but nothing worked.

Finally, I figured out a way to get myself out of the slump during the 2006 Ginn Clubs & Resorts Open, and that was knowing what type of shot I’ll hit and how to play with it. Before knowing my shot type, I always tried to hit my shot straight. In golf, there’s nothing harder than trying to hit your shots straight. This led me to make mistakes in tournaments.

At the Ginn Clubs & Resorts Open, I learned that I hit a fade, a shot that starts out straight and slightly curves right.

Because of this, during the third round, I aimed left of the fairway and decided to play with just a fade. Doing this helped a lot because it allowed me to hit more fairways. I was also able to swing more easily and gain confidence in my game.

For the first time in two years, I finished in the top 10 at the Ginn Clubs & Resorts Open, and exactly a month and a half after that, I was able to win again. From driver to putting, there’s no such thing as an unimportant club in golf.

Above all, I believe the tee shot is the most important. Depending on where you hit your second shot from, it’ll make a difference in your chances of getting the ball closer to the pin. If you hit the fairway, there’s a higher chance of you hitting the green with longer clubs than hitting a short iron from the rough.

Annika Sorenstam of Sweden, a former top golfer, would hit a draw, the opposite of me. Unlike a fade, if you hit a draw, the ball starts right and curves left. The shot that Sorenstam can hit with confidence is a draw.

Once you figure out the type of shot you’ll hit, you need to figure out how you’re going to play the hole from the tee box. Usually, tee boxes are aimed either slightly to the left or right of the fairway. They’re not very often aimed at the center of the fairway.

Amateurs tend to tee up in the middle of the tee box without acknowledging this. If you do this, there will be a higher chance of you hitting toward where the tee box is aimed.

The last thing I want to point out is to visualize your shot before hitting your tee shot. When I take my stance, I always visualize the height and trajectory of my ball. This allows me to have more confidence in my swing which helps to minimize miss shots.