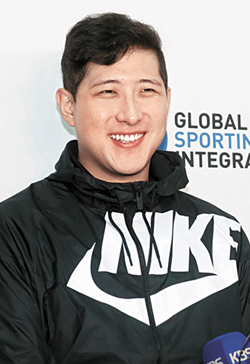 Hwang Jae-gyun of the San Francisco Giants hit his second home run in spring training during an exhibition game against the LA Dodgers at Camelback Ranch in Phoenix on Tuesday.

Hwang was the seventh hitter in the lineup and played third base on the field. He went 1-for-3 with one home run and one run batted in, helping his team win 4-2.

During his first at-bat in the third inning, Hwang hit a ground ball against the Dodgers’ ace pitcher Clayton Kershaw and made it to first base. His home run came during the fifth inning, when the Giants were down 2-1. He hit a solo jack against Steven Geltz, the Dodgers’ right-handed pitcher.

This marks Hwang’s second home run since his spring training game against the Chicago Cubs on Feb. 26. His batting average improved from 0.309 to 0.313 with five hits in 15 at-bats.

Hwang signed a minor league contract with the Giants and is playing exhibition games on an invitation to spring training.

KNSU to give honorary degree to IOC president

Korea National Sport University said Wednesday that it will give an honorary doctorate degree to International Olympic Committee President Thomas Bach next week.

Bach will receive the degree next Tuesday for his role in the development of sports and his contribution to global peace through the Olympic Games, the university said. Bach, 63, has been leading the Olympic body since 2013.

Bach, a gold medalist in fencing at the 1976 Montreal Olympics, is the second IOC chief to receive an honorary doctorate degree from the university. In 1988, it bestowed the honor on Juan Antonio Samaranch, who held the IOC’s top job from 1980 to 2001.