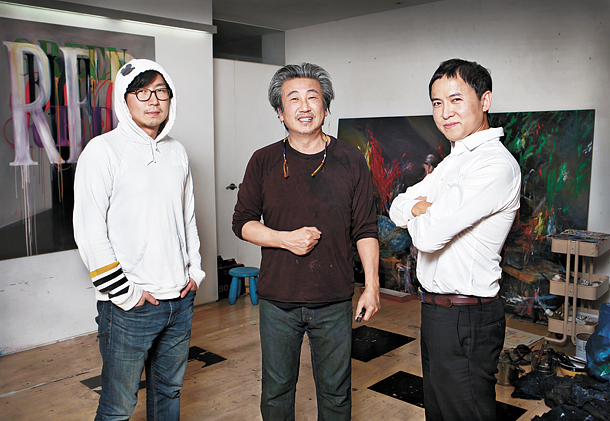 From left, artists Lee Wan, Cody Choi and curator Lee Dae-hyung pose at Choi’s studio in Seongbuk-dong, central Seoul on Feb. 13. They will be on display at the Korean Pavilion at the 57th Venice Biennale which starts on May 13. [PARK SANG-MOON]

“To be Korean and global at the same time.”

Koreans have obsessed over this idea, especially in regard to arts and culture, since the country’s modernization in the early 20th century. That concept was also visible in the statement that Arts Council Korea released in June 2016, when it appointed Lee Dae-hyung as the curator of the Korean Pavilion for the 2017 Venice Biennale, which starts on May 13. The statement read “He is the finest choice to show Korean artists’ power through the combination of their local and universal aspects.”

What is interesting is that the two artists Lee chose to represent the Korean pavilion - Cody Choi and Lee Wan - have never tried to make art that is “Korean and global.” Rather, they’ve been questioning what on earth is Korean and what on earth is global through their works.

“To Koreans, globalization seems to have the same meaning as the transition to capitalism, westernization, and modernization,” Choi said in an interview with the Korea JoongAng Daily last month at his studio in Seongbuk District, central Seoul.

Then, what is the identity of Korea which has been globalized half by force and half voluntarily through its history of falling under colonial rule and then liberating itself? These are the questions commonly implicit in Choi’s and Lee’s artworks.

Choi attempted to find the answers in a philosophical yet intuitive manner, like “Joking in pain,” as he said. The pain is the result of the cultural conflicts that the artist, born in Korea in 1961, experienced personally and socially during his career between the mid-80s until the mid-2000s in the United States.

Choi’s hot-pink sculpture “The Thinker,” which will be presented at the upcoming Korean Pavilion show, is such a “joke in pain.” He has re-created Auguste Rodin’s “The Thinker” - regarded as the physical embodiment of western philosophy - with toilet paper and pink American medicine for upset stomachs. The work was also shown in his major retrospective in 2015 at Kunsthalle Dusseldorf in Germany, which was curated by art historian John C. Welchman.

On the other hand, Lee Wan, who was born in 1979 and has grown up in a more globalized Korea than Choi experienced, has sought the answer with logical approaches of political economy and sometimes with deadpan humor. The “Made In” series is one example. The work won him the first ArtSpectrum Award from the Leeum, Samsung Museum of Art in 2014 and will be included in the Korean Pavilion show. 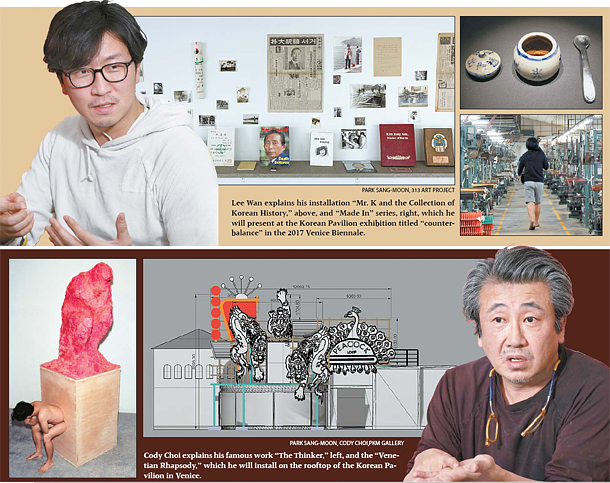 For the series, the artist went to more than ten Asian countries, and while there, produced a variety of consumer goods such as sugar and suit jackets alone. The items he created are commonly produced through the international division of labor under the global free-trade system.

The video pieces detail the processes along with the final products and data showing the political and economical struggles of each nation.

Lee Dae-hyung, now director of the auto giant Hyundai Motor’s art projects and best known as the chief curator of the 2010 “Korean Eye” exhibition at Saatchi Gallery in London, said he plans to showcase the two artists’ works at the Korean Pavilion under the title of “Counterbalance: The Stone and the Mountain.”

The curator said that “recent world events and trends, such as the rise of right-wing populist movements [in Western countries] and a general backlash against immigrants” have inspired him.

The West once advanced globalization through imperialism until the early 20th century and then through free trade pacts. But, now, neo-isolationism is gaining strength in the countries. In this ironic reality, the Korean Pavilion wants to counterbalance the views about globalization with the perspectives of artists from a non-Western country, the curator said.

“The two artists have different roles in this exhibition,” the curator Lee said. “Cody Choi makes up the vertical axis that deals with time, while Lee Wan makes up the horizontal axis dealing with space. Cody will present three to five works that will show the chronological change of cultural conflicts that he experienced. And Wan will present the “Made In” series that show the process of Asian countries’ struggles with modernization and globalization. He will also present ‘Proper Time,’ an installment made up of 600 clocks, which shows the reality of globalization across diverse regions.”

Each of the 600 clocks are engraved with the name, date of birth, nationality and occupation of the individuals that Lee Wan met and interviewed around the world. Each clock moves at a different pace, depending on the amount of time the individual has to work to afford a meal. “Every clock is a person’s abstract portrait, and the collection of the 600 clocks becomes the abstract portrait of global inequality,” the curator Lee explained.

Asked how he will unfold the exhibition in the space of the Korean Pavilion, which is notorious for being difficult to exhibit art in with its curved glass walls, the curator said, “By Cody’s suggestions, Wan will use the main room of the building, while Cody will install his works in the leftover spaces and outdoors.”

“Wan presents six works in total,” the curator continued. “Five of those including ‘Made In’ and ‘Mr. K and the Collection of Korean History’ will be shown in out of order on one side of the space, while ‘Proper Time’ will be displayed in perfect order in a pure-white space on another side. Cody will transform almost-impossible-to-exhibit spaces with his works and will show ‘Venetian Rhapsody’ on the pavilion’s rooftops, which will be the highlight.”

Choi’s “Venetian Rhapsody” is destined to change the Korean Pavilion’s atmosphere dramatically as flashy neon signs that depict dragons, tigers and peacocks, which might be more fitting in Las Vegas or Macao, will be lurking in the rooftops.

The artist chuckled as he said, “I hesitated after being invited to represent the Korean Pavilion. If I were to compare myself to a singer, I’m neither a [anti-establishment folk singer] Kim Min-ki, nor [idol star] Lee Hyori but have wandered between the two worlds. Going to Venice is like taking the path of an idol star. The Venice Biennale is all just bluff. Artists act like they’re all stars, while art critics and dealers say that have come here to find new artists but they actually mean new businesses. There’s no difference from Las Vegas. Actually there is a [reproduction of] Venice in Las Vegas! Then, why not a Las Vegas in Venice? My work would say ‘Hey, this is Las Vegas. This is the power of bluff.’ If I were a Kim Min-ki, I wouldn’t be there, but as I’m not, I do want to be there, but I don’t want to adapt myself to the biennale’s culture. My pain comes from internal conflict and I have no choice but to solve it through my works.”

The driving force behind Choi’s works is that very conflict and confusion.

“I went through an identity crisis and Korea’s history also went through that as well,” he said. “It was in the mid-1990s that Korea finished the lagged import of Western cultures and the time lag of cultural trends almost disappeared. So Koreans who came of age after that time won’t be less confused. That’s why artists like Lee Wan have the ability to pick up an issue that crosses the world and articulate their views about it. That isn’t the case with my generation. My generation saw Western cultures flood into Korea as an incomplete metaphor, so we are a schizophrenic generation. The generation before mine, on the other hand, the one Wan’s ‘Mr. K’ talks of, is a generation that had clear ideology battles such as traditional Confucianism against western culture and communism against capitalism, as they went through big events such as the colonization by Japan. They had much less confusion back then.”

Artist Lee Wan agreed with the point and said, “Important events of Korean history were all in the past for my generation, so we can approach them with less confused and more objective views. Korea’s industrialization for example happened even before I was born, and democratization was complete when I was young.”

The artist Lee’s “Mr. K” is based on his discovery in a flea market of the personal effects of one man, Kim Ki-moon (1936-2011), such as his family photo album and a few certificates he received when he was young. With Mr. K’s belongings juxtaposed with the artist’s own collection of artifacts, Lee Wan will trace and re-construct not only an individual’s history but also the history of modern Korea.

“Three generations coexist in this exhibition,” said the curator Lee, “Mr. K’s, Cody Choi’s and Lee Wan’s generations. The exhibition is a story of each generation represented by each of the individuals, and is extended to the story of Korea’s identity in the global context and the politics behind the formation of that identity.”

The recent emergence of neo-isolationism in the West and in international affairs are going to add more meaning to the exhibition.

“I’m still putting the final touches on the ‘Made In” series, and I can see something there,” the artist Lee said. “Western nations wanted to plant their culture and create a one-sided market in Asian countries, but these countries grew to be competitors, and the West seems to be uneasy about it. It used to be an ‘unlevel playing field,’ and as the field gradually levels, they seem to want to make it unlevel again. They move factories from one country to another, affecting ordinary laborers in the regions. And in that tumultuous event, no country other than Korea is affected more by it. That is the source of the inspiration for my works.”