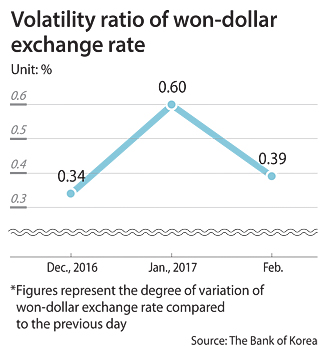 Volatility in won-dollar exchange rates picked up in January to 0.6 percent but it subsided to 0.39 percent in February, the Bank of Korea said Wednesday.

The figures represent the average rate changes compared to the previous day.

February saw the won appreciate 2.8 percent against the greenback due to U.S. President Donald Trump’s caution against a strong dollar and the administration’s move to embrace a more protectionist stance in trade.

Fluctuation reached its peak, particularly right before Trump took over the White House due to uncertainties surrounding his experience. The average gap between the intraday high and low was 8.5 won between Jan. 2 and 17, compared to December’s 4.0 won.

The figure was the highest range of fluctuation in two years on the won-to-dollar exchange rate.

Still, the Bank of Korea remained cautious since the Fed’s anticipated rate increase will likely impact the foreign exchange rate in March.

“Volatility of the exchange rate has moderated after the inauguration of Donald Trump,” said a source at the Bank of Korea.

“But the potential rate hike in the United States could act as an inflection point,” the source added.

Entering this year, the won is among the best performing currencies in Asia, gaining more than 5 percent.

Goldman Sachs said that heightened geopolitical risk, political strains and punitive action by China could turn investors against the won, according to Bloomberg. China’s alleged economic retaliation is of particular concern as dwindling tourism from China would put a dent in tourism revenue and retail.

The investment bank estimates that the decline in travel could cut Korea’s tourism revenue by about $5 billion.

Other analysts say that the increase in rate exchange is far from steep.

“The dollar-won rate will likely face upward pressure with the dollar gaining amid growing U.S. rate hike worries,” said Ha Keon-hyeong, an economist at Shinhan Investment. “However, the pace of increase should be gradual given the steady inflow of foreign capital into the domestic stock market despite increasing uncertainty.”