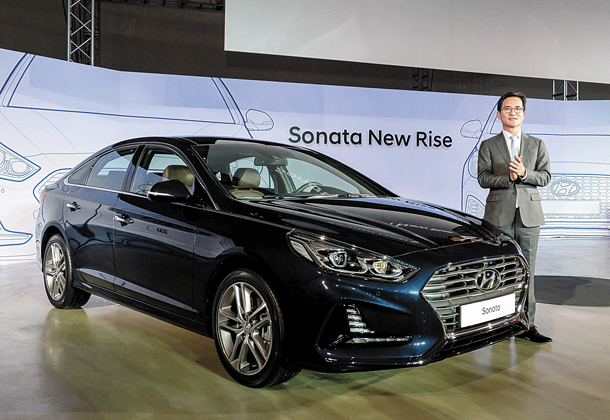 Hyundai Motor launched the facelift of its flagship Sonata on Wednesday, a move that is expected to intensify competition in the already heated midsize sedan market in Korea.

Dubbed the Sonata New Rise, the latest version is a partially overhauled model that comes three years after the seventh generation was introduced.

“That is about 12 to 13 percent more than what has been sold last year,” Lee added.

Its exterior design has been revamped with a younger vibe, moving away from previous versions that have been known for their flat designs.

The front face implemented a cascading grille that has become Hyundai’s signature design identity. The grille has been enlarged, and its position has been lowered to give it a sportier look.

A design change is more apparent on the backside. The license plate, which previously was located on the trunk lid panel, has been lowered below the bumper. Instead, the word “Sonata” is in the center, going for “wider” and “clean” look.

“The vehicle targets those in their 20s and 30s who have become a leading purchase group of cars,” Lee said.

The latest Sonata also implemented the latest smart-car technology to enhance convenience and safety, some of the most important factors for the younger generation, according to the company.

It is installed with Hyundai Smart Sense, which supports safe driving such as keeping the car inside the lane and halting the vehicle in emergency situations.

The driver can circulate the air inside the car with the push of a single button. The function is the industry’s first in Korea, the company said.

The overhauled Sonata reflects Hyundai’s determination to maintain its top position in the domestic midsize sedan market amid the consecutive launch of new models by rivals.

Last year, Renault Samsung Motors introduced its flagship SM6 which became the bestselling car for the company. It has sold 57,478 units since its launch in March.

The popularity of the Sonata has been declining in recent years. Although it maintained the top place by selling 82,203 vehicles last year, it was a significantly lower amount compared to the prior year when it sold 108,438.