‘We’re not the poor and weak group that people thought’

‘We’re not the poor and weak group that people thought’ 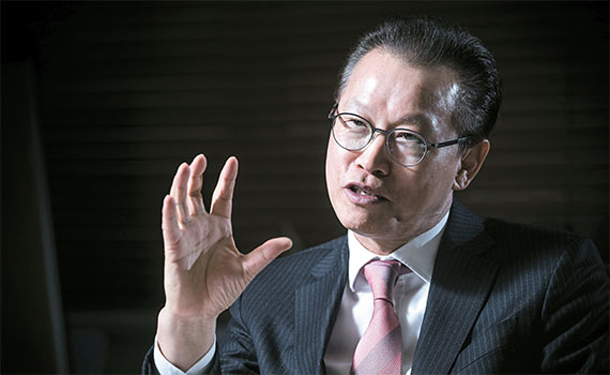 The qualification exam for high school graduation was not a conventional course for success in the past, as students with unstable backgrounds frequently chose it as an alternative for public education. This perception is recently changing, however, as high-profile politicians including South Chungcheong Governor An Hee-jung and Seongnam Mayor Lee Jae-myung have become widely known to have passed the test. National Assembly Speaker Chung Sye-kyun became the first qualification test passer to join the top three posts in the government administration.

The network of people who took the qualification exam in society is intact, although many of them are living different lives from one another. In a New Year’s celebration event and party for an alumni’s essay publication, Gov. An Hee-jung participated to give his words of blessing amid his busy schedule as a presidential contender.

The JoongAng Ilbo sat down with Moon Ju-hyun, chairman of MDM Group and chair of the National Passers Alumni Association, to discuss the world of qualification test passers and the association’s directions for future activities.


Q. The presence of people who passed the qualification test seems to be growing in our society these days.

A. I think it’s seen as a more recent wave as more of our alumni are active in the political scene these days before the presidential election. But there were always many of us engaging in many fields in society like politics, economics and culture in the past. There are famous names that people are surprised to hear that he or she passed the qualification test, even among high-ranking public officials and graduates of top universities.

On some years, more than 100 Seoul National University entrees were from our group and sometimes we collectively ranked among the top 10 high schools that produced would-be government officials who passed the national civil servant exam. That’s why we were called the hidden prestigious school. We’re not the poor and weak social group that people once thought we were. It’s a positive sign that people known nationwide are starting to emerge from qualification test passers. My opinion is that we might have reached a turnaround in terms of our social role in society.


What is the homogeneity of qualification test passers?

The answer is well described in the book introduced at our event last month. The book is a collection of autobiographic stories of our members of how they got to reach their current posts despite hardship in fields from politics to education and national security. These are all people that have once reached their lowest points in life, whether its poverty, sickness or extravagation during their younger years.

Having missed out on regular school education, unlike most ordinary people, can be a very lonely and suffering process.

This is why a lot of successful people who went through this path have so many stories to tell of their lives and how they’ve managed to turn it around. Like wild flowers, they are full of life and the beauty it provides. The first association chair Park Young-lip, also partner at law firm Yoon & Yang, worked in his younger years as an errand boy at an inn, a restaurant server and a manual laborer. He was later acknowledged by the public by leading the Hansen’s disease case for 14 years to victory in the Supreme Court ruling.


Although all of you have a common background of passing the qualification test, you must have different backgrounds and current situations. Isn’t it hard to lead a collective alumni association?

Qualification test passers are estimated to be around 2 million people. This is far larger than any network based on hometowns or schools. Among them, around two thirds are those who took the qualification test for high schools (the test exists for elementary, middle and high schools). Several thousand pass the exam every year. Although it may account for those who passed the high school exam, Kwon Tae-oh, secretary general of the National Unification Advisory Council, said these people have attended the “Samchully” high school, using the word that symbolizes the entire land of Korea. In every corner of the country, it’s possible to find one of our alumni.

Among them, a group of around 100,000 members conduct meetings or social projects in different cities and regions nationwide. As other associations, one problem we’re facing is that association is overly focused on mid-aged members. We’re trying to pull in younger alumni.


Now that passers’ social status is improved, is there any possibility of them forming some kind of an interest group or holding a political stance?

More and more people are inquiring about that question. It may be because an increased number of passers are entering the high-profile circle of politicians. However we, as an association, do not have any intention at all to act collectively in that way. It actually may be a good voting base for politicians or a good network base for businessmen. Among the association’s senior alumni there’s one that served congressman four times and even rose to minister. In his case, the test was a way to finish public studies early and he had nothing to do with economic hardship. Nonetheless, he always publicly noticed that he saw the qualification test, saying that it gave him votes from our alumni.

But our group members are very different from one another up close. The age range varies from children to the elderly, not to mention men and women. The list of test passers shows people from their teens to those in their 80s. The test was not only for people who were too poor to go to school. In general, a lot of the passers have strong personalities and characteristics, as they are people who managed to work their way out in life outside school walls. In some ways, it shows a side of our society as a whole, where conflict and division are always happening.


How diverse is the passers’ backgrounds?

Gov. An Hee-jung entered university after taking being expelled from and quitting school several times as a teen when he was into student movement. Mayor Lee Jae-myung was from a very poor household and all of his three brothers passed the test as well. National Assembly Speaker Chung Sye-kyun is from a slash-and-burn family based in Jinan, North Jeolla. There are so many stories among our alumni members, including a judge who was once a shoe shiner and a senator whose parents were displaced residents living in a poor hillside village. These stories once made the conventional image of qualification test passers in a sad way.

But taking qualification tests can come from largely two reasons depending on whether it was intended or unintended. Some missed the timing to enroll to schools due to a difficult background — this falls into the unintended category. Some skipped grades as prodigies or chose alternative schools or home schooling due to dislike of the tight-laced public education. Some drop out of special-purpose high schools because they saw disadvantages in school grades that matter when applying for university. These days, the latter cases are increasing. Jung Geun-mo, former minister of science entered Seoul National University at a younger age than his peers after passing the qualification test during his first year at the prestigious Kyunggi High School. The late physicist Benjamin Lee, former Chief Justice Kim Yong-joon and Kim Doo-hee, former minister of justice, also quit prestigious schools and passed qualification tests to enter university earlier.


Passers have overcome difficulties and therefore understand the hardship people go through in life. What do you think these people can do to contribute to our society?

I hope our group leads in expanding coexistence and peace in the current era full of frustration and conflict. Our association guides members not to conduct any doing that would arouse political dispute or religious conflict via social network. The group of 2 million people, as I said, is a smaller version of our society. We need to lead in filling the gap between the divided group of people holding a national flag or candles. But forming a sort of political power of our own is not possible, nor advisable.