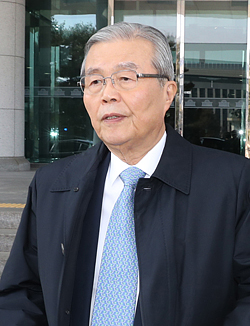 Kim Chong-in, former interim leader of the Democratic Party, walks out of the National Assembly on Wednesday after quitting the party. [YONHAP]

Kim, an economist-turned-politician who was brought into the party by former DP chief Moon Jae-in, didn’t rule out the possibility of running for president himself or creating his own party to counter Moon, with whom the 76-year-old has formally split.

“People are divided along the line of whether they will accept the court’s ruling (if it orders Park removes from office). Politicians must address this division seriously,” said the veteran politician during a meeting with reporters Wednesday after he submitted his letter of resignation to the DP, forsaking his title as a DP member as well as that of its provisional lawmaker. “I will decide on my next move [in the political arena] once the court delivers a verdict on the impeachment motion,” said Kim.

When asked whether he would run for president, Kim neither confirmed nor denied it. “Didn’t I just say I would think about it?” he asked reporters.

Because Kim was elected a proportional representative of the DP, he automatically lost his parliamentary seat when he left the party. For a long time Kim has indicated he would quit the DP in protest of the way the party has been run, which Kim has viewed as being over-dominated by Moon loyalists.

Kim’s Wednesday departure from the DP came 14 months after he was offered a job by Moon to lead the party ahead of the April general election. Though he was brought in by Moon, Kim has often issued scathing criticisms of Moon and his supporters in the party.

At one point Kim castigated them for acting with arrogance “as if they had already won the election.” Kim’s criticism of the DP continued Wednesday. He said the party was “under the illusion that it has all but clinched a presidential victory.” He noted that Korea’s politics was now an unpredictable territory and little is sure about the presidential contest ahead.

With Kim now outside the DP, questions are rising over whether he can bring together political forces against Moon, who leads in all polls about this year’s presidential election.

One of the many issues on which Kim found himself at odds with Moon was the timing of a Constitutional amendment. While the fifth-term lawmaker has been calling for immediate discussions on the matter so a change can take effect as soon as possible - even prior to the presidential election - Moon has snubbed Kim’s demand, saying the matter should be addressed after the election by an incoming administration.

The frontrunner characterizes attempts by the ruling Liberty Korea Party and other politicians to put a constitutional amendment bill on fast track for ratification before the election a ploy to extend their control over state affairs.

Rumors are circulating that Kim will try to pitch a “big tent” party by drawing anti-Moon forces and those who side with him on the fast constitutional amendment process. Whether many DP lawmakers follow him could depend on a steep drop in Moon’s approval ratings.

So far, Moon is maintaining a firm grip on his lead in the polls with a mid-30 approval range and a 20 percent gap with second place candidates.

To pass an amendment, at least 200 out of the Assembly’s 300 lawmakers must agree to put it up for a national vote or referendum. The DP alone has 121 lawmakers in the assembly. For a national vote, at least half the electorate should participate in voting to render it valid. Of the cast votes, a majority of votes are required to pass the amendment bill.