Jumbos manage to turn their luck around

Jumbos manage to turn their luck around

The members of the Incheon Korean Air Jumbos celebrate their V-League regular season win on Tuesday. With the win, the Jumbos now have a chance to win the team’s first-ever championship series. [SHIN IN-SUOP]

Among the seven V-League teams, the Korean Jumbos probably have the least luck when it comes to winning. Ever since the Jumbos made their professional debut in 2005, they had three chances to win the championship series but never won a game.

However, after winning the V-League regular series on Tuesday, the Jumbos got another chance at winning the championship series. Of all the players on the team, Han Sun-soo, setter and the captain of the Jumbos, may just want to win more than anyone, as he’s been with the Jumbos since his professional debut in 2007.

Since 2010, the Jumbos were always depicted as the most likely team to win.

For three straight seasons from 2010-11, the Jumbos struggled to win against the Daejeon Samsung Bluefangs. The Jumbos finished third, fourth and fourth during that three regular seasons. With the team’s losses, the Jumbos became the team that can’t perform in big games. 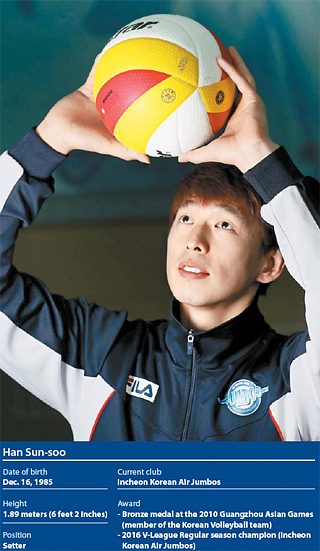 “Starting this year, the team put aside the thought of winning and just focused in one game at a time,” Han said.

While Han was away from the team to fulfill military duty from November 2013 to August 2015, the Jumbos struggled. So the players on the team could not be any happier about the return of Han. Despite expectations, Han struggled, as he was suffering from an injury to his right shoulder, and was physically unprepared due to his longtime absence from volleyball.

But he never gave up. Instead, he worked harder and played all the regular series games.

Han is stubborn. When a hitter makes an error, Han sets a ball to that specific hitter until he makes a kill. Fans have criticized Han for his style of play, saying his approach is dogmatic.

“I may be stubborn, but I’m not willy-nilly,” Han said. “The setter’s role is to keep the hitters going during the game because in the end, they’re the ones playing on the court.”

“Han is Korea’s best setter,” Park Ki-won, who was hired as a head coach for the Jumbos right before the start of the season, said. “We talk about our game plans before the game so the rest is up to the setter.”

“Just as we did in the regular season,” Han said, “we will try our hardest preparing for the championship series.”