Korea knocked out of WBC after losses to Israel, Netherlands

Korea knocked out of WBC after losses to Israel, Netherlands 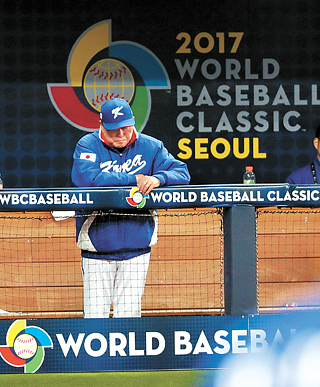 Korea has made an early exit from the 2017 World Baseball Classic (WBC), and with the team’s poor performance, manager Kim In-sik said he has decided to blame himself for everything.

The Korean team had hope as the Chinese Taipei was tied 5-5 until the beginning of ninth inning, but Chinese Taipei allowed a walk with full bases during the end of ninth to finish the game 6-5.

Korea hosted the first round of the WBC at the Gocheok Sky Dome for the first time, but failed to perform for two straight WBC events.

Kim, once called the “nation’s baseball manager” as he led the team to the semi-finals at the 2006 WBC and runner-up finish at the 2009 WBC, said he will take all the blame for the team’s poor performance against Israel and the Netherlands and has announced he will conclude his career as coach. That, however, did not stop him from assigning blame elsewhere.

“In 2006, the team played well because we had major leaguers like Park Chan-ho, Seo Jae-weung and Kim Byung-hyun,” Kim said, “and 2009 was another successful year because the pitchers in the KBO, like Bong Jung-geun and Jung Hyun-wook, played well. But this year, the skills of our hitters, pitchers and offense were comparably low. That difference separated us from the top two teams, Israel and the Netherlands.”

He added, “The speed of our pitcher’s fastball was about six to seven kilometers slower than the Netherlands’ pitcher’s.”

Kim also mentioned how the Netherlands’ pitchers were well trained in curve balls and low pitches.

“Korean players need to focus more on basic skills when they start baseball,” Kim said, going on to say he will never forget the team’s loss to Israel.

“It’s my fault that we couldn’t score when we needed it most,” Kim said.

Though winning against Chinese Taipei won’t be enough to advance, Kim still asked the team to try their best.

Four teams finishing last in each pool will have to qualify to participate in the first round. To avoid going through a qualification round for the 2021 WBC, the Korean baseball team must win in the game against Chinese Taipei, which was not complete as of press time.