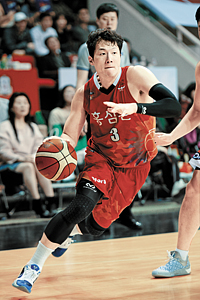 The Anyang KGC, No.1 in the Korean Basketball League, will host the Seoul Samsung Thunders, No. 2 in the league, today. The Anyang KGC hopes to maintain its sole lead as the two teams are only one win apart in the KBO rankings.

The Anyang KGC got off to a great start in March as they won two of their matches. Lee Jung-hyun, leader in KBO scoring, has been averaging 15.8 points with 2.7 rebounds and 5.3 assists. Aside from Lee, the two foreign duos will also look forward to this weekend as they both were the leading scorer during the game against Wonju Donbu Promy on Wednesday. The two teams have played five games throughout the season and the Thunders are ahead of the Anyang KGC as they won four out of five games. 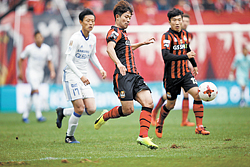 After a successful K-League classic debut, Gangwon FC continue to improve its season record as they host FC Seoul this weekend.

Lee Keun-ho led the team with the season opener as he scored two goals during its game against the Sangju Sangmu FC, the military club. For his performance, Lee was named the MVP in week 1. With the 2016 K-League leading scorer, Jung Jo-gook, the team will have its chance to test their ability for the first time this weekend.

Meanwhile, FC Seoul, the defending K-League classic champion, has not yet won a game as they tied against the Suwon Samsung Bluewings 1-1. Lee Sang-ho, a new signee from Suwon, led the team as he scored a goal to tie the game. After losing the team’s main striker, Carlos Adriano, the team still seemed shaky and weren’t able to produce a goal until the 63rd minute. Although the tie did not hurt the team, FC Seoul needs to win the game to get back in the rankings. 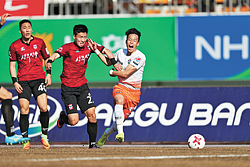 After losing their first match of the season, the team will compete to gain its first win over the weekend.

Sangju Sangmu FC lost to Gangwon FC 2-1 and starts its season with one loss. Kim Ho-nam, a new addition to the team, scored the team’s only goal in the 80th minute to tie the game. However, with Lee Keun-ho’s second goal in the 87th minute, the game was concluded as the military club’s loss.

Robert Feczesin, a foreign striker from Hungary, was the key player for the team and scored a goal to tie the game in the 84th minute. The game came to a conclusion in the second extra time when Kim Shin-wook scored a winning goal for Jeonbuk Hyundai Motors. Despite the loss, the Jeonnam Dragons fought well against the league’s strongest team.