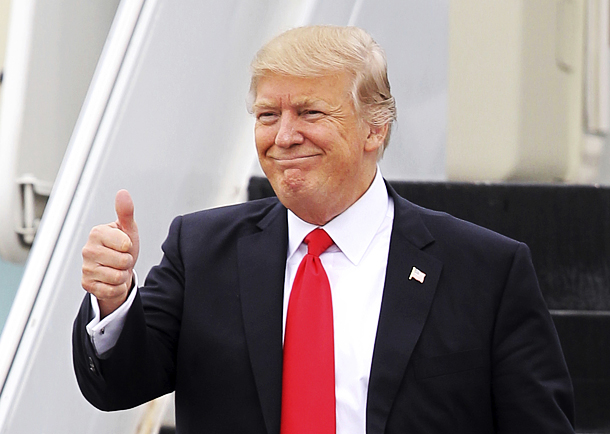 U.S. President Donald Trump gestures as he walks down the stairs of Air Force One upon his arrival at Palm Beach International Airport in West Palm Beach, Florida, on March 3. [AP/YONHAP]

It’s been two months since Donald Trump was inaugurated as president of the United States, and the country has been stirred by his outspoken style and scandal involving Russia. His executive orders on immigration and protectionist trade policies are making other countries worried about American isolationism.

Since his election victory, Trump has not shown any dignity or proposed tolerable policies like his predecessors have. While his style has inspired criticism, his supporters seem to welcome the moves. But the Trump administration’s success will depend on how much support he can draw from moderate voters.

The good news for his administration is that the U.S. economy is heading toward a Goldilocks period. A “Goldilocks economy” refers to one that is neither too hot nor too cold, maintaining moderate growth and stable prices.

Tax cuts are at the core of Trumponomics. He has pledged to lower the rate for the highest income tax bracket from 39.6 percent to 33 percent and corporate taxes from 35 percent to less than 20 percent. He also wants to abolish the inheritance tax. Another Goldman Sachs alum, Treasury Secretary Steve Mnuchin, said he would focus on tax reform by the end of August.

The Republican Party is considering a border adjustment tax as a way to encourage exports and expand tax revenue. The administration is also pushing for protectionist trade measures under an “America First” policy. Trump has already scrapped the Trans-Pacific Partnership and criticized China, Japan and Germany for profiting from low exchange rates. Commerce Secretary Wilbur Ross said existing trade agreements need to be reviewed.

As consumer and investor sentiment is revived, the U.S. economy is making a speedy recovery. It has nearly reached full employment, and the Federal Reserve is planning to raise interest rates to prevent inflation and an overheated market, likely by this month, which would be earlier than expected. Since the United States is the second-largest export market for Korea, we will welcome the recovery.

However, protectionist measures and interest rate increases are risk factors for the Korean economy. Since Korea enjoys a large surplus from trading with the United States, we could become a target of trade pressure. When the border adjustment tax is imposed, price competitiveness will be noticeably undermined. When the Fed rate increase comes earlier, capital will flow out of Korea, making foreign exchange and financial markets unstable.

In a rapidly changing international environment, we need skillful economic diplomacy to avoid trade friction and a currency war.

Washington is pressuring our economy with trade protectionism, while China is making retaliatory moves in response to Thaad. North Korean nuclear weapons and missiles threaten our security and economy. We need leadership and competency to overcome the challenges of our turbulent times.

We desperately need policies to improve economic health and boost domestic consumption. Restructuring our insolvent companies needs to be hastened, and quality jobs in high value-added service industries need to be created. Investment in infrastructure will help improve our growth potential. Assistance for innovative small companies should be raised, and the government needs to help working-class families educate children, own homes, pay back debt and prepare for retirement. Korea can learn from President Trump’s bold nationalistic economic policies by employing pragmatic market advocates.

International economic organizations predict that the global economy will improve as the upward trend of the U.S. economy and soft landing of the Chinese economy will result in increased trade volume and higher raw material prices. But prospects for the Korean economy are still gloomy. While other countries enjoy a Goldilocks economy, we might still be eating cold porridge. When our country’s politics stabilize again, Korea will need to execute bold and effective economic policies.