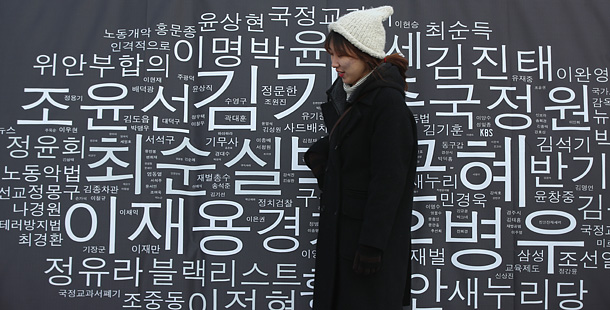 A banner created by a Korean youth civic group in January that aims to criticize the “culture blacklist” that the Park Geun-hye administration created and managed to oppress artists. [YONHAP]

The Ministry of Culture, Sports and Tourism has set aside 8.5 billion won ($7.4 million) to restore cultural projects in literature, theater, film and other areas that were abolished or modified due to government censorship, officials announced on Thursday.

The culture ministry came under fire in recent months for operating a so-called “culture blacklist,” in which it listed 10,000 actors, directors, entertainers, artists, literary figures and others in the arts and entertainment field who seemed to have ideas that the government disapproved of.

Lee Yeong-yeol, deputy director for arts policy, said that the plan will not “restore all projects” that are believed to have undergone unjust treatment, but added that they will “increase the scale of restoration for such projects in the future.”

Part of the 8.5 billion won will also go into new programs to support the embattled local publishing and performing arts industries.

This comes after Song-In Books, the country’s No. 2 wholesale company, went bankrupt, leaving publishers and bookstores with damages, and also revealing some old business practices in the industry that led to a chain effect of financial damages.

To further ensure objectivity in choosing cultural projects to fund, the ministry will make sure the judgement process is clear by sharing its minutes as well as adopting an ombudsman system where anyone who considers part of the process unjust can raise an objection.

Also, the ministry said it will work to make the Arts Council Korea and the Korean Film Council more autonomous and independent from government interference.

These two agencies, which theoretically stand for the rights of the artists and those in the film business, were harshly criticized for enforcing the blacklist, yielding to political pressure from the Park Geun-hye administration and allegedly her confidantes.

Perhaps the highlight of all measures announced on Thursday is the one that promises to enact a bill aimed at protecting artists from political oppression or censorship. The Constitution says artistic freedom and artists’ rights should be protected, but the enactment of the law will allow any attempt that goes against those to be criminally punished. The culture ministry will submit a motion for the law in the first half of this year.

In addition, the ministry will launch a so-called artists’ rights council that will be in charge of monitoring any acts that violate artistic freedom and discriminate against artists for political reasons.

Given that ministry officials mostly used the excuse that they had to do what they were told, the ministry said it will also revise the code of conduct for the officials of the Ministry of Culture, Sports and Tourism so that they can reject an order from their superiors if they consider it unjust and not experience disadvantage. There will also be a hotline where an official can report his or her superior’s unlawful and unjust orders.