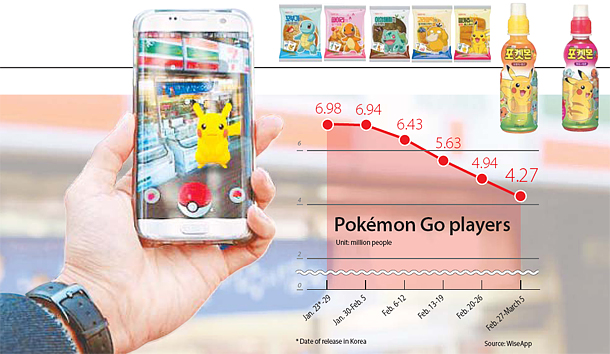 More than a month after Pokemon Go’s release in Korea, retailers have been actively incorporating the smartphone game and its characters into their marketing and products, even as the game’s popularity appears to be declining.

Lotte Group’s convenience store chain 7-Eleven and fast-food subsidiary Lotteria were the first to sign a partnership with Pokemon Go developer Niantic to make their stores and restaurants Pokestops, which are points in the game connected to real-life locations where players can score items and catch Pokemon.

Since Feb. 23, 8,500 7-Eleven stores and 2,709 Lotteria locations, which include its eponymous fast-food joint as well as cafe franchise Angel-in-us and Krispy Kreme, were turned into Pokestops or gyms where people can battle.

7-Eleven reported a 12.7 percent increase in sales between Feb. 23 and March 2 compared to the week before the partnership. Lotteria’s food establishments also saw a sales increase of 7 to 10 percent. “The uplift was particularly noticeable among locations outside the Seoul metropolitan area and in smaller cities,” said Oh Tek-yong of Lotteria’s communications team.

Lotte’s food and beverage subsidiaries have been using Pokemon characters to market their products. This includes fruit-flavored drinks from Lotte Chilsung with Pokemon labels on the bottle and pastries from Lotte Confectionary that come with Pokemon stickers. Both were released in early winter last year and benefited from the timely release of Pokemon Go in Korea in late January.

Even before that, public interest in the game had been bubbling since summer. Lotte has sold over 2 million Pokemon pastries since November and 1.2 million Pokemon beverages since December.

Other companies have jumped on the Pokemon craze with a plethora of themed products, including stationery and smartphone cases engraved with the characters. E-Land Group’s fashion brand SPAO last month released a line of shirts and hoodies featuring Pokemon characters and Pokeballs.

While retailers are just picking up on the trend, the game itself seems to waning in popularity. The number of Pokemon Go players last week was 4.3 million, down 39 percent from the first week of release, according to the latest recent data from local research firm WiseApp. The number of players has been on a steady slide since its peak of just under seven million at the end of January.

In item sales, Pokemon Go’s ranking fell to ninth on Google Play and 10th on Apple’s App Store on Wednesday. On Google Play, the game had maintained second place from late January up until last Thursday, when it first fell below that rank. On Apple’s App Store, the game was already out of the top five since Feb. 25 and reached a rank as low as 12 on Monday.

Niantic released its first major upgrade of the game in Korea on Feb. 17, which included more characters and diverse gameplay functions, but it was not enough to provide a reboot. Some expected the partnership with Lotte might pull in more players after the number of Pokestops in rural areas, where many of Lotte’s stores and restaurants are located, increased.

However, player statistics have shown that the partnership hasn’t been enough to reverse the decline. A spokesman for Niantic said there are no further plans yet to sign partnerships with other local companies.

Many analysts see Pokemon Go’s petering popularity as natural in trend-conscious Korea, where new games barely last several months at the top before they are crowded out by newer releases. Avid game players have noted that Pokemon Go’s gameplay is too simple and limited in content to hold players for a long period of time.

“There’s nothing left to do now that I have caught almost every Pokemon,” complained one user in an online game community.

Niantic’s weak penalties against players who cheat using GPS manipulation software have also been cited as a downside.