Women fight for justice in ‘Part-Time Spy’ : Hardships faced by contract workers are highlighted in the film

Women fight for justice in ‘Part-Time Spy’ : Hardships faced by contract workers are highlighted in the film 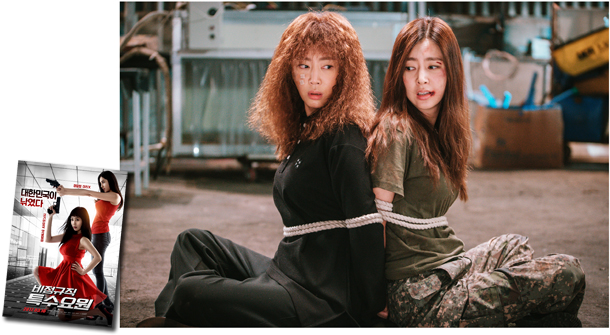 “The Artist: Reborn,” which hit theaters on Thursday, is one of few recent films featuring a woman (Ryu Hyun-kyung) in a lead role. Though there have been a number of female-centered movies perform successfully at the box office recently, including “The Last Princess,” starring Son Ye-jin, and “Familyhood,” starring Kim Hye-soo, attempts at putting an actress at the forefront still remain few and far between.

But only a week after “The Artist” hit theaters, another female-centered movie, “Part-Time Spy,” comes to big screen. Starring actresses Kang Ye-won of “Insane” (2016) and Han Chae-ah of SBS series “All About My Romance” (2013), the action-comedy centers on an investigation conducted by the two characters, one a desperate job seeker and the other a hardcore, foul-mouthed police officer.

The movie begins as Yeong-sil (Kang), who makes a living out of working multiple part-time jobs, finally lands a job as a contract worker for the National Security Agency. The film fast-forwards two years, just as Yeong-sil realizes that her contract will not be renewed. She finds out that the organization has fallen victim to a voice phishing scam, which costs the organization and may get her boss fired if discovered.

Eager to become a regular worker, Yeong-sil goes undercover at the company that cheated her boss, and scams people through voice phishing in order to find out who is in charge of the illegal operation. There, she meets an undercover policewoman named Jeong-an (Han), who is there for the same reason, and the two cooperate to achieve their goal.

Though the film is comical and includes a number of entertaining action scenes, at the center of the film is the struggle of a contract worker.

“I had lots of feelings seeing contract workers being used as expendable resources,” director Kim Deok-su said during a press preview held in Seongdong District, eastern Seoul, on Wednesday.

“I thought that being set apart and divided from others (regular workers) was highly unreasonable. Anyone, including me and you, can become [a victim.] Since [contract workers] live unstable lives, they start committing crimes,” Kim explained as the reason behind the production.

The central theme of contract workers is also what drove Kang to join.

“I was attracted to the movie because it touches on social issues,” Kang said at the press preview. “My younger sister worked as a contract worker for quite a long time, so I’m well aware of the distress it entails.” She continued, “I hope many people … can find comfort after watching the flick.”

Through “Part-Time Spy,” the filmmaker wished to put out a female-centered movie that can become a commercial hit.

“From the beginning, one of the purposes that I and the producer had was to make a female-centered movie that anyone can easily enjoy. There are lots of treasured people, and I believe bringing out various genres with diverse people will benefit not only [the actresses], who will be provided more opportunities, but also audiences, who will be able to see fresh faces.”

The movie, which in some way is like the female-version of the recent hit “Confidential Assignment,” which revolves around a joint investigation between South and North Korean police officers, does not seem to add anything new to the action-comedy genre, which audiences have already seen in many different forms by now.

However, Yeong-sil’s unique set of skills, which she developed from taking on all sorts of part-time jobs, like how to calm ferocious attack dogs, will make audiences leave the cinema with something to laugh about.

“Part-Time Spy” also stars actors Nam Koong-min, Kim Min-kyo and Jo Jae-yun, and is scheduled for release on Thursday. It is rated 15 and over, and runs for 117 minutes.