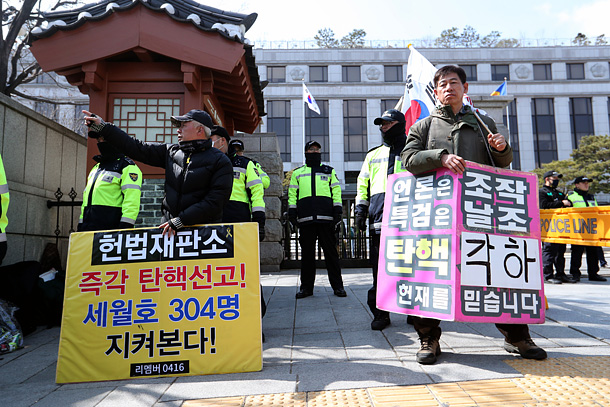 In front of the Constitutional Court on Thursday, one anti-Park protester and one pro-Park supporter picket for their demand to remove or restore, respectively, President Park Geun-hye. The highest court will make the final ruling on the fate of Park at 11 a.m. today. [PARK JONG-KEUN]

The Constitutional Court will make a ruling this morning to decide the fate of the presidency of Park Geun-hye and subsequent political future of the country.

The impeachment trial of President Park took 92 days to reach a verdict. The National Assembly passed a motion to remove her from office on Dec. 9, 2016 for 13 criminal and constitutional violations, including a charge that she allowed her secret inner circle to influence state affairs for their private gains. The final session to announce the ruling is scheduled to start at 11 a.m. today.

The session will be aired live. Of the 104 seats in the gallery, 24 were allocated for public audience. The competition for the drawing was 1 to 795.

Acting Chief Justice Lee Jung-mi or Justice Kang Il-won will read the verdict, including minority opinions, first. The conclusion on whether to remove Park or not will be announced last, and the decision will have effect immediately after the reading ends.

Although the court started the trial with the full nine-member bench in December, Chief Justice Park Han-chul retired at the end of January. Since then, the trial was operated by the eight remaining justices. The justices, escorted by armed police forces, arrived at the Constitutional Court Thursday morning to continue their deliberation.

The meeting is expected to be the justices’ final deliberations, and they are expected to exchange opinions on key issues concerning the legitimacy of the impeachment for one last time. Their voting to reach a verdict is expected to take place this morning, shortly before the announcement of the ruling.

Under the law governing the court, it takes six out of the eight justices to vote to support the impeachment in order to end her presidency. If the court upholds the impeachment, Park’s presidency will be terminated, and she will become the first president in the history of Korea to be removed from the office through the impeachment process.

If the court clears her, Park’s presidential powers will be restored immediately. Her term will end in February 2018 and the presidential election will take place in December 2017 as initially scheduled.

President Park remained silent and stayed in her residence inside the Blue House on Thursday. “She is calmly waiting for the ruling,” a presidential aide said. No special event or message was planned, but the presidential chief of staff, Han Gwang-ok, reportedly hosted a senior secretariat meeting to prepare for the situation after the ruling.

If the court rules to remove her from office, Park’s presidential powers will be taken away immediately. Because she will be dishonorably dismissed from the post, no special treatments for a former president will be offered.

She won’t be able to receive the pension, which would be about 12 million won ($10,350) a month, and deprived from other benefits such as three secretaries and one driver. Security protection will still be offered for up to 10 years.

She will be barred from working in a public office for the next five years. She will also lose the presidential immunity from a criminal prosecution.

It remains to be seen if Park will face a criminal investigation immediately after the court upholds the impeachment.

The prosecution and the independent counsel had attempted to question her in the past, but failed. They had no means to compel her to cooperate due to her presidential immunity but Park, if the Constitutional Court approves the impeachment, will have no shield.

The prosecution has reinstated its special investigation team earlier this week, and it is inevitable that they will investigate Park as she was already named a co-conspirator in various corruption and abuse of power charges. A physical detention might be sought if she refuses to cooperate.

It, however, is unclear if the prosecution will immediately go after her, because of the political sensitivity. If she is removed, the presidential election must take place within 60 days, indicating that the campaign will begin immediately.

Investigating a former president - even if she is dismissed - will be burdensome, because the prosecutors’ previous attempt to investigate former President Roh Moo-hyun was a

catastrophe. He committed suicide after being questioned by the prosecutors in 2009, and the leaders of the prosecution stepped down in the aftermath.

If the court rejects the impeachment, Park’s presidential powers will be restored immediately, and it will become nearly impossible to investigate her until the end of her term. She already labeled the prosecution “politically biased” and rejected its first attempt to question her.

As the countdown for the ruling began, patrons of the president and supporters of impeachment gathered near the court to voice their demands in dueling rallies. Police beefed up the security in the area, deploying about 1,500 troops to set up the perimeter.

The police raised the security level to the second grade nationwide since Thursday, allowing the police to mobilize up to 50 percent of its forces to control rallies. The police said it will upgrade the security to the highest level today in order to prepare anticipated violent responses following the ruling.

Rival rallies continued throughout Thursday and they will likely stay overnight. Organizers of the candlelight vigils, which took place every weekend for months, planned a massive event starting 7 p.m. Thursday at Gwanghwamun Square. They planned to march toward the Constitutional Court.

Both groups also vowed to resist a ruling that does not fit their positions. The alliance of Park supporters’ groups issued a statement on Thursday and said the court’s decision to rule on the impeachment trial with only eight judges is unconstitutional and illegal, thus the ruling, whichever it will be, is invalid. “If they endorse impeachment, we will bid our lives for the country,” it said.

The alliance of the Park critics also said they will march toward the Blue House, if the court rejects the impeachment.