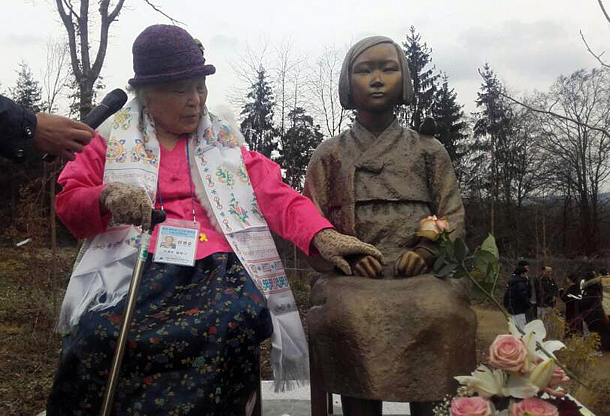 Ahn Jeom-soon, a 90-year old former Korean “comfort woman,” sits next to the statue at the Nepal Himalaya Pavilon in Wiesent, Germany, on Thursday. [YONHAP]

WIESENT, Germany - A statue of a Korean girl symbolizing victims who were sexually enslaved by Japanese troops during World War II was erected in Germany’s southeastern municipality of Wiesent on Wednesday.

The unveiling ceremony of the “comfort woman” statue was held at the Nepal Himalaya Pavilion, a park in Wiesent, which is part of the district of Resenburg. It was attended by some 100 local German officials and representatives from the Suwon City government and civic groups from South Korea.

Some 200,000 Asian women, including Koreans, are estimated to have been forcibly taken to front-line brothels for the Japanese army during the war. Korea was a colony of Japan from 1910 to 1945. The city of Suwon, south of Seoul, reached an agreement with the German municipality to erect the statue, a replica of a life-size bronze statue that was first introduced in December 2011 in front of the Japanese Embassy in central Seoul.

The statue in Seoul was produced to mark a local civic group’s 1,000th weekly rally against the Japanese government. Participants of the on-going rallies demand an apology and compensation over the wartime atrocities committed by the neighboring country. There are currently over 40 comfort woman statues erected in and outside of South Korea, including in the United States, Canada, Australia and China. Ahn Jeom-soon, a 90-year old former South Korean comfort woman, visited Wiesent to witness the first comfort woman statue set up in Europe. Ahn, who relied on a wheelchair, sat next to the statue and touched it, as if patting a granddaughter.

“This event was possible because of all the hard work all of you have put in,” Ahn told the attendees at the ceremony.

Heibert Wirth, chairman of the board of the park, who named the statue “Soonyi,” welcomed it, saying that the place, while cold now, will soon be filled with flowers in two months.

Suwon city had initially struck a deal with Freiburg, a different German city, last July to set up a comfort woman statue in that city. The agreed setup was scuttled because of pressure from Japan. Yeom Tae-young, Suwon’s mayor, said the event was part of a greater effort in shedding light on war crimes women have had to face.

“The statue was erected to let the world know of the human rights of the women that were trampled due to the tragedy of war and to not repeat such history,” said the mayor.