Impeachment was not an inevitability

Impeachment was not an inevitability 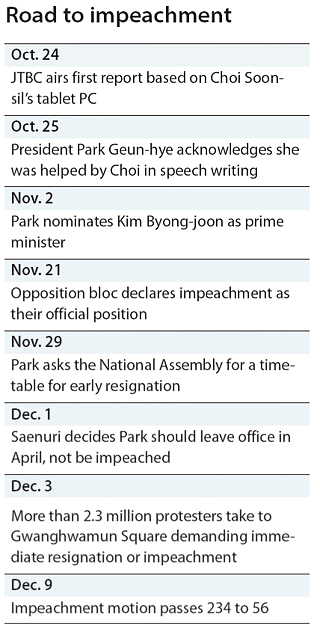 On Oct. 24, broadcaster JTBC dropped a political bombshell. It had gotten access to a tablet computer owned by Choi Soon-sil, a close friend of President Park Geun-hye. Choi was being investigated for her role in two foundations.

An exclusive report aired that day revealed that the tablet obtained by JTBC, an affiliate of the Korea JoongAng Daily, showed that Choi - who had no official government role - edited the president’s speeches. In a series of reports that followed based on materials found on the computer, JTBC reported that Choi had such clout in the Park administration that she was almost a shadow president.

But over the 47 days, Park’s impeachment was not a foregone conclusion and many political solutions were proposed - even as crowds started gathering in Gwanghwamun Square in central Seoul every Saturday night demanding the president’s immediate resignation. On Dec. 3, more than 2 million showed up.

Far less drastic solutions were proposed by politicians. In retrospect, the presidential office and the National Assembly had a number of chances to reach a political compromise that could have allowed the embattled president to serve out her term. But no solution was acceptable to the president. And as proposal after proposal was turned down, the road narrowed to the impeachment vote on Dec. 9 - which was supported by at least 62 members of Park’s own ruling party.

Today the Constitutional Court will decide whether Park took a chance that led to vindication - or historic disgrace.

The opposition bloc - comprised of the Democratic Party, People’s Party and the Justice Party - suggested that the National Assembly appoint a new prime minister to replace Hwang Kyo-ahn, Park’s appointee.

He would take control of state affairs on behalf of the unity government.

Opposition lawmakers refrained from calling on Park to resign or be impeached out of concern of a potential public backlash, like the one faced by the then-opposition Grand National Party, the predecessor of the Liberty Korea Party, when it impeached President Roh Moo-hyun in 2004.

On Nov. 2, Park seemed to be ready to deal. She announced that Hwang would be replaced. As his successor she nominated a liberal: Kim Byong-joon, former senior secretary for the Roh Moo-hyun government. A kind of unity government was proposed with the conservative Park as president and the liberal Kim running the government as prime minister.

The opposition was appalled: the central point of their proposal was that the parliament would select the new prime minister.

The DP and the People’s Party demanded that Park withdraw her appointment. She didn’t, but Kim was never confirmed and Hwang held onto the job.

With the two sides showing no sigh of compromise, the weekly anti-Park protests grew in November.

Some opposition lawmakers called for the president to announce a timetable to resign from the presidency in an orderly manner so that an early presidential election could take place. It was a face-saving proposal. Presidential frontrunner Moon Jae-in was among the politicians making that demand.

But Park didn’t respond and opposition figures started saying impeachment was the only solution.

The opposition bloc was largely in favor of impeachment - but it knew it needed 30-some yes votes from the ruling Saenuri Party, now the Liberty Korea Party, lawmakers to reach the 200 votes required for impeachment. Some 30 ruling party lawmakers were on the fence or openly supporting impeachment.

But on Nov. 29, Park went on national television to announce she could step down early if the National Assembly came to an agreement on the timetable. The buck was passed to the parliament. Park said she would follow whatever compromise was reached by the legislature.

Following Park’s announcement, the ruling party made official its position that Park should leave office in April 2017, 10 months early, and demanded the opposition agree. Some party members who had agreed to vote in favor of impeachment changed their minds, saying they no longer had reasons to impeach the president.

That change of heart led the People’s Party to break away from a joint agreement with the DP to vote on an impeachment motion on Dec. 2. The impeachment movement was disintegrating.

With the opposition’s move now in question, the largest number of anti-Park protesters took to the streets on Dec. 3 with more than 2.3 million pressing the parliament to call a vote on the impeachment motion.

Taken aback by the size of the crowd - which made clear its dissatisfaction with the Assembly’s reluctance to impeach the president - the assembly put an impeachment motion to a vote on Dec.9.