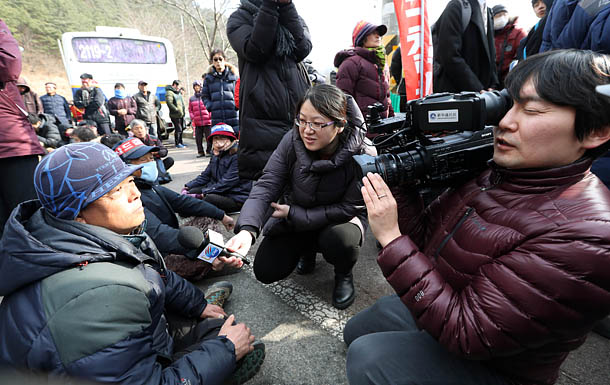 Chinese TV news crew on Wednesday cover Seongju residents who stage a sit-in protest at the entrance to the Lotte Skyhill Golf Course, which was chosen as the home of the U.S. antimissile defense system Thaad. [YONHAP]

Hundreds of chanting protesters marched toward the Lotte Skyhill golf course Wednesday night in Seongju County, North Gyeongsang, as activists and residents voiced their opposition to the deployment of an American missile shield.

The weekly rallies have been held for months after the South Korean government announced last September that the golf course would be the antimissile system’s new home, but never has the crowd been so large.

Three-hundred people showed up in solidarity, nearly twice as many as the normal outcome. It was a day after the military said in a surprise announcement that the first elements of the Terminal High Altitude Area Defense (Thaad) system, including two launchers, arrived Monday night at the Osan Air Base in Pyeongtaek, Gyeonggi.

Local media expected the arrival would start in June at the earliest. Officials from the Ministry of National Defense tipped off reporters that the remaining parts would arrive by early April. One headline in a major local newspaper read that the government had crossed the Rubicon.

“As citizens of this country, we’ve fulfilled our obligations,” yelled Kim Jong-gyeong, co-chief of a civic group based in the neighboring city of Gimcheon, North Gyeongsang. “But now, the government is trying to risk our lives with Thaad.”

The organizer of the Wednesday rallies, a coalition of six civic groups, launched a daily overnight demonstration near the golf course to urge the government to scrap the deployment. It sued National Defense Minister Han Min-koo and four other military officials for misfeasance, pressing the prosecution to penalize them for sealing the Thaad deal with Washington without earning the consent of the public or the National Assembly.

In a separate rally held in Gimcheon on Wednesday at 7 p.m., TV entertainer Kim Je-dong, whose bold antigovernment statements have often made news headlines, took the front stage and slammed conservative hardliners for calling Thaad-opposing liberals like him ppalgaengi, a derogatory term for communists.

Fissures in the domestic political scene deepened as opposition liberal parties slammed the government for rushing through the deployment, accusing it of trying to complete the process so that the next administration wouldn’t be able to reverse it.

If the Constitutional Court decides today to impeach President Park Geun-hye, a presidential election could come as early as May. Some of the strongest candidates up for the ticket are liberals who have expressed varying levels of discontent with Thaad.

The ruling Liberty Korea Party, to which President Park belongs, welcomed the deployment and said it was the “right decision” to protect the country from North Korean provocations.

The main opposition Democratic Party called the first batch of arrival “unilateral” and “rushed,” saying the government hadn’t made the effort to hear public opinions. The minor liberal People’s Party called on the government to immediately halt the deployment and said the decision required parliamentary consent.

Prime Minister Hwang Kyo-ahn, who is acting president, gave his full support for the antimissile system, saying South Korea is in urgent need of boosting its military capabilities against North Korean provocations.

Hwang has not made a bid in the upcoming presidential election, but scored the highest rank for a conservative in recent polls.

Meanwhile, Chinese press have flocked to Seongju to interview local residents in what appears to be an effort to gain traction for their opposition to Thaad. China believes the Thaad battery can be used to spy on its airspace. Seoul and Washington maintain it will not be.