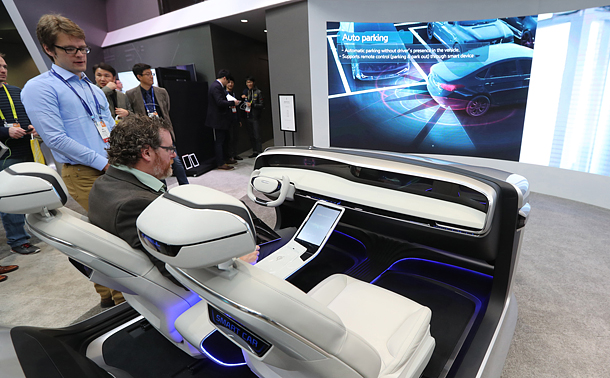 A visitor experiences the autonomous driving system at the Hyundai Mobis booth in the Consumer Electronics Show at the Las Vegas Convention Center in January. [YONHAP]

Along with the development of AI, big data, IoT, mobile and embedded software, the self-driving car is the fourth industrial revolution buzzword in the automobile industry.

The autonomous car is a vehicle that operates and navigates by sensing the objects and road condition in real time through sensors, LIDAR (light detection and ranging), radar and decision-making. Moreover, it integrates mobile devices and communications network to enable remote controlling and external sharing of communications information with other vehicles. Currently, a driver has to keep a close eye on the surroundings, constantly operating the steering wheel and pedals. But as autonomous driving technologies develop, driver’s eyes, hands, feet will be freed, and ultimately, the car will drive itself while riders can engage in other activities.

Self-driving cars can prevent traffic accidents caused by inattentiveness and allow the car to be used as a personal office. As it also is expected to improve air pollution, companies and governments are backing related technology. In addition to traditional carmakers, Google and other IT companies are leading technology development through competition and cooperation. Currently, self-driving functions such as detecting vehicles nearby are partially introduced in the controlled situation of low-speed operation in certain highways.

However, in addition to the many obstacles until commercialization and mass use of self-driving cars, there are questions on feasibility itself. Car accidents are directly linked to life, and automobiles require strict safety and security unlike other consumer products. No error can occur in software or the operating system while on the road, and strict confidence to maintain good conditions in severe weather is required. So technology specifications like mobile phones and IT devices cannot be applied.

Moreover, autonomous car should be able to respond to real-life situations better than humans, but the current artificial intelligence remains a probability calculation in controlled situations such as board and card games. More fundamentally, we ask whether the self-driving car can predict the unpredictable, such as ever-changing weather, congested roads, pedestrians and other vehicles in crowded downtown streets. Personal computers have been developed for decades, but program errors still occur. Airplanes fly in autopilot mode, but pilots still have to be in the cockpit. Skeptics ask whether full autonomous driving would be possible when cars move in far more complicated situations than PC and airplanes.

It is interesting that automobile industries and IT companies have different views on autonomous vehicles. IT companies predict they will lead technology and existing carmakers will be subordinate entities providing machine parts. But automobile firms say that structural safety, artistic quality and convenience are the key elements in cars, and carmakers will lead changes while embracing IT advancement.

At the Consumer Electronics Show this year, automobile manufacturers’ presentation of autonomous cars grew, so some say IT is leading automobiles. But it could also be seen as the auto industry getting into IT.

The government and companies need to discuss an organized development strategy and priority. Korea is strong in automobile, IT and communications fields but considerably behind in core technologies. Rather than waging individual battles and jumping on the bandwagon, companies need to focus on collaboration among dominant industries and safe operation-related technologies that have great market potential.

The government and the private sector should work together to prepare a thorough roadmap for Korean-style autonomous vehicles. At the 2017 Seoul Motor Show that starts this month at KINTEX, we can witness the status of Korean self-driving vehicles, and it will be an opportunity to develop a future roadmap.


*The author is the chairman of Korea Automobile Manufacturers Association.