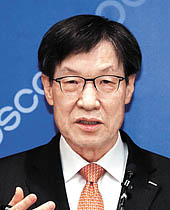 Kwon Oh-joon, chairman of steelmaker Posco, denied any connection to Choi Soon-sil, the secretive confidante of former President Park Geun-hye, who was ousted from office on Friday, during a shareholders meeting that approved him for another term as head of the nation’s largest steel producer.

“It is a 100 percent false accusation that Choi was involved in my election as chairman,” Kwon said during a meeting with reporters after shareholders voted him into office in Gangnam District, central Seoul, on Friday.

Kwon first took up the post in 2014 and was rumored to have had backing from Park’s former chief of staff Kim Ki-choon, who also had ties to Choi.

Kwon did admit that another Park staffer, Ahn Jong-beom, influenced Posco’s management in diverse ways, such as pushing the company to establish a sports team that was expected to cost 1.6 billion won ($1.4 million), but said he did his best to minimize political influence in the company.

“We were going to form a fencing team on Ahn’s request, but Posco wasn’t essentially influenced by the requests,” Kwon said. “During the 12 hours of investigation held last November, I have explained on all speculations, and I feel all suspicions have been resolved.”

Kwon was referring to a request from the prosecution in November to answer to donations Posco made to two controversial nonprofits set up by Choi and his alleged efforts to relinquish shares of Posco’s in-house ad agency Poreka to Cha Eun-taek, a former TV commercial director linked to Choi.

No charges were found against Kwon.

His reappointment to the chairman post suggested the company’s confidence in his leadership. During Kwon’s tenure, operating profit grew 19 percent to 2.6 trillion won at the end of 2016 from 2.2 trillion won in 2013. Posco’s profit margin increased to 10.8 percent from 7.3 percent during the same period. It was the first time in five years the company recovered to a two-digit margin.

During his next term, Kwon said he would focus on finding new sources of profit for the company while keeping its core business secure.

“Steel is of course our cash cow, and our foremost goal is to make that business sustainable,” Kwon said. “On top of that, we would like to integrate top-notch technologies such as artificial intelligence, the Internet of Things and big data to maximize our competence and spot new sources of profit.” He mentioned the possibility of making smarter factories by applying new technology to manufacturing.