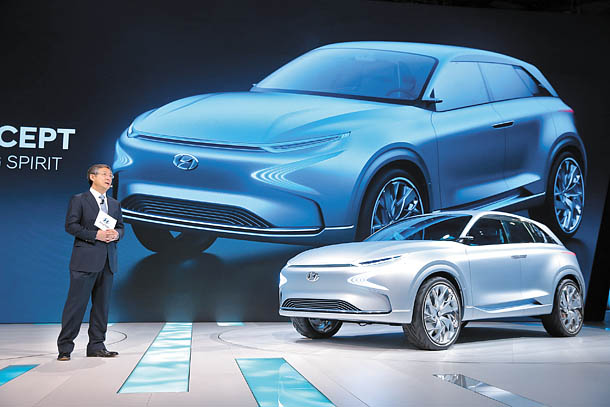 The Geneva International Motor Show is often dubbed the haute couture of automobiles.

As one of the world’s top five auto shows, along with ones in Frankfurt, Paris, Detroit and Tokyo, the Geneva motor show has been considered a catwalk for premium carmakers because of its focus on supercars and yet-to-be-commercialized concept cars.

It was no exception at this year’s event, the 87th, which also emphasized the importance of future mobility technology represented by battery-topped vehicles and self-driving cars.

A total of 180 auto-related companies participated in the show, displaying more than 900 models, 148 of which were European- or world-premieres. The event runs through March 19. 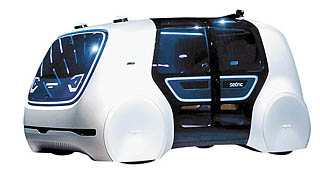 Italian luxury carmaker Ferrari unveiled its fastest car under the name Ferrari 812 Superfast during the show. Topped with a 6.5-liter V12 engine that is able to generate a maximum horsepower of 800 and maximum torque of 530 pound-feet, the car can travel at a speed of 340 kilometers per hour (211 miles per hour). It takes 2.9 seconds to go from 0 to 100 kilometers per hour.

Lamborghini, another Italian brand specializing in sports cars, unveiled the Huracan Performante, which spits out a maximum horsepower of 640 equipped with a 5.2-liter V10 engine. It also takes a mere 2.9 seconds to go from 0 to 100 kilometers per hour. The car can reach speeds of 325 kilometers per hour.

German auto company Porsche launched its Panamera Turbo SE in a hybrid form. The car can travel up to 50 kilometers just on its electric battery, giving it a fuel-efficient touch.

British luxury carmaker Rolls-Royce created a splash, with a diamond-covered version of the Ghost Elegance released under the nickname Diamond Stardust. Rolls-Royce said it is the most expensive model launched so far in its history. The car is covered with diamond-encrusted paint.

Mercedes-Maybach, the luxury sub-label under Mercedes-Benz, touted the most expensive sports-utility vehicle model, labeled the G-Class 650. The car oriented for off-road courses is topped with a retractable roof. It is reportedly the most expensive SUV model in the world, introduced with a price tag of $500,000.

Aside from the extravagant vehicles, the auto show also brimmed with the latest developments in future mobility, in line with global trends.

German carmaker Volkswagen introduced its first autonomous concept model called Sedric - a portmanteau for “self-driving car,” at the motor show. Pursuing a fully autonomous car, or a Level 5 one, which requires no driver, the podlike four-seated vehicle contains no steering wheel or pedal.

Chung Eui-sun, the group’s vice chairman, said the concept car will act as a “stepping stone which will put Hyundai Motor at the forefront in establishing a fuel-cell-based energy industry.”

Kia debuted its premium performance car, the Stinger. The five-seat sedan is based on the concept car GT that was unveiled in Frankfurt in 2011. Hyundai also debuted a wagon version of its hatchback model i30. A wagon or hatchback model is relatively unpopular in Korea, but is well-received in Europe and Japan.

SsangYong launched its SUV model Korando in Europe and unveiled a concept car of its seven-seat SUV called XAVL.

“Along with XAVL, SsangYong Motor will continue to suggest ideas of future mobility by establishing a more innovative SUV lineup,” SsangYong Motor President and CEO Choi Jong-sik said at the event.