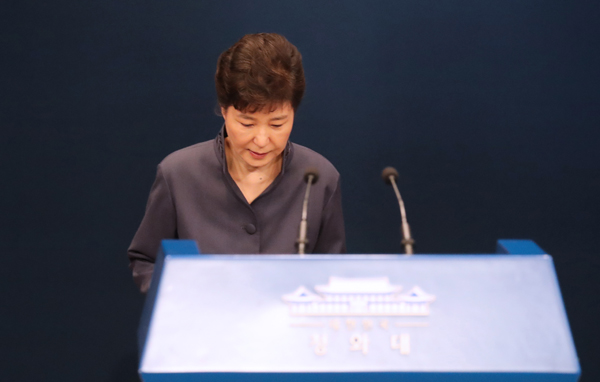 President Park Geun-hye was removed from office Friday as the Constitutional Court made a historic ruling upholding the National Assembly’s impeachment of the scandal-plagued leader.

Park became the first president in Korean history to be dismissed from the post. Of the eight judges of the Constitutional Court, all eight supported the impeachment.

The National Assembly passed a motion to remove her from office on Dec. 9, 2016 for 13 criminal and constitutional violations, including a charge that she gave her secret inner circle influence over state affairs for their private gain. She was also accused of having failed to serve her presidential duty to protect the lives of the citizens during the Sewol ferry’s sinking on April 14, 2014.

The ruling to remove Park from office is final and irreversible. The Constitutional Court earlier said the impeachment trial is a single-trial system, and there will be no appeal or retrial.

A presidential by-election will take place within 60 days. The campaign will start immediately.

After a special investigation last year, prosecutors concluded that Park was a co-conspirator in multiple alleged incidents of corruption and abuse of power. An additional investigation by an independent counsel also identified her as a bribery suspect. It remains to be seen if the prosecution will immediately go after her because of the political sensitivity of such an action.

Park, the eldest daughter of the late strongman Park Chung Hee, was elected as the country’s first woman president in December 2012. Although the victory allowed her to go back to the Blue House, where she spent her teenage years and also served as acting first lady after her mother’s assassination in 1974, she was dismissed before completing her five-year term.