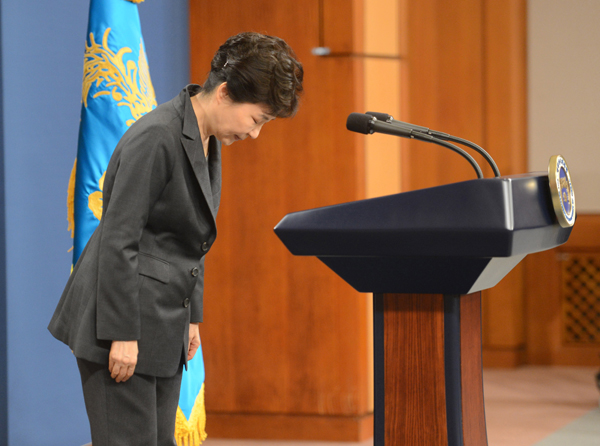 Park Geun-hye became the first president in Korean history to be dismissed from office Friday, as the Constitutional Court made a historic ruling upholding the National Assembly’s impeachment of the scandal-plagued leader.

Acting Chief Justice Lee Jung-mi of the Constitutional Court announced that the verdict to remove Park was reached unanimously among the eight judges currently on the bench.

Park issued no public message on Friday. Stripped of all presidential power, the disgraced leader remained in the Blue House because her private residence in Samseong-dong, southern Seoul, was not ready to receive her, according to an aide.

Park, the eldest daughter of the late strongman Park Chung Hee, was elected the country’s first woman president in December 2012. She had 11 months left in her term.

The announcement of the ruling was broadcast live nationwide. Park, who didn’t attend any of the hearings in her 92-day-long trial, did not appear for the verdict either.

While the court rejected the National Assembly’s arguments that Park should be removed for abusing her power to unfairly dismiss certain public servants and to oppress press freedom and for failing to fulfill her duty to protect the lives of citizens when the Sewol ferry sank in 2014, the eight judges agreed that she should be removed for allowing a friend to interfere in state affairs for private gain.

Lee also condemned Park for having repeatedly lied to the public by denying all suspicions involving Choi Seo-won, better known by her original name Choi Soon-sil, and concealing the truth.

Lee said Park deserves to be fired for having allowed Choi influence state affairs for private gain and her abuse of presidential power to assist Choi’s various corrupt actions. Lee said the charges were grave enough to remove Park from the presidency.

“The president must exert her powers in respect to the Constitution and laws and her performance of her public duty must be transparently revealed for public evaluation,” Lee said. “But Park completely hid Choi’s intervention in state affairs. Whenever suspicions were raised, she denied and even criticized those raising the questions. Therefore, the checking and monitoring ability of constitutional institutions such as the National Assembly and media failed to function."

Lee pointed out that Park’s violations took place throughout her term. Park tried to cover up the truth and gagged the concerned people whenever the National Assembly and media raised questions, leading to the prosecution of top officials from the Blue House and administration, Lee said. “Park’s violations of the Constitution and laws infringed upon the principles of representative democracy and the spirit of rule of law,” Lee said.

The court also condemned Park for having repeatedly lying to the public. “In her addresses to the nation, she promised to cooperate with investigations to lay bare the truth, but refused to be questioned by the prosecution and an independent counsel and rejected the Blue House raid attempts,” Lee said.

Since the National Assembly passed a motion to remove her from office on Dec. 9, 2016 for 13 criminal and constitutional violations, the Constitutional Court spent 92 days on the perhaps the most politically volatile case in the country’s history.

The court rejected Friday Park’s lawyers’ argument that the legislature’s passage of the impeachment motion was flawed. The judges also rejected their argument that the trial was unlawful because of the vacant seat of Chief Justice Park Han-chul, who retired at the end of January.

In her opening remarks, Lee stressed that the judges tried their best for a fair and speedy trial. Deliberations took place almost every day.
Lee also said the court hopes that the extreme split in public opinion over the impeachment will end with the ruling. “The rule of law is a principle that we must all protect under all circumstance,” Lee said.

The court also announced supplementary opinions regarding Park’s alleged nonfeasance during the Sewol ferry’s sinking, in which 304 passengers died on April 16, 2014 due to a weak government rescue operation. Although the judges agreed that her nonfeasance during the tragedy could not be used as grounds for dismissal, Judges Kim Yi-su and Lee Jin-sung said Park did fail to respect the constitutional duty to faithfully serve as the president and a public servant.

“We decided to point out Park’s failure to faithfully serve in her duty,” Lee said, “because the tragedy of losing many people’s lives must never be repeated by leaving a wrongful belief to future presidents that it is acceptable to unfaithfully perform their duties in a time of a national crisis.”

Judge Ahn Chang-ho also gave the opinion that the impeachment trial was not an ideological contest between the conservatives and liberals, but a matter of protecting the constitutional order, and dismissal was necessary to end bad political customs.

The ruling to remove Park from office is final and irreversible. The Constitutional Court earlier said the impeachment trial is a single-trial system, and there will be no appeal or retrial.

A presidential by-election will take place within 60 days. The campaign will start immediately.

Park’s presidency was terminated immediately after Lee finished reading the verdict. Presidential immunity, which has shielded her from criminal prosecution, also ended.

After a special investigation last year, prosecutors concluded that Park was a co-conspirator in multiple alleged incidents of corruption and abuse of power. An additional investigation by the independent counsel also identified her as a bribery suspect. It remains to be seen if the prosecution will immediately go after her because of the political sensitivity of such an action.

Park became the fifth president in Korean history to leave the presidential office before their term ended.

Korea’s first four presidents failed to complete terms for various reasons. Syngman Rhee, the first president of the country, resigned in April 1960 after it was revealed that his election victory for the fourth term was rigged. Yun Posun, elected president in August 1960, was forced to step down in 1962 in the aftermath of the May 16, 1961 coup by Park Chung Hee, the late father of Park Geun-hye.

Park Chung Hee, who ruled the country with iron fist, ended his 18-year- presidency when he was assassinated in 1979. Choi Kyu-hah was elected president in December 1979, but he was forced to resign in 1980 as a result of a military coup by Chun Doo Hwan on Dec. 12, 1979.

The five-year, single-term presidency began with Roh Tae-woo in 1988. All five presidents elected under the system completed their terms except for Park.