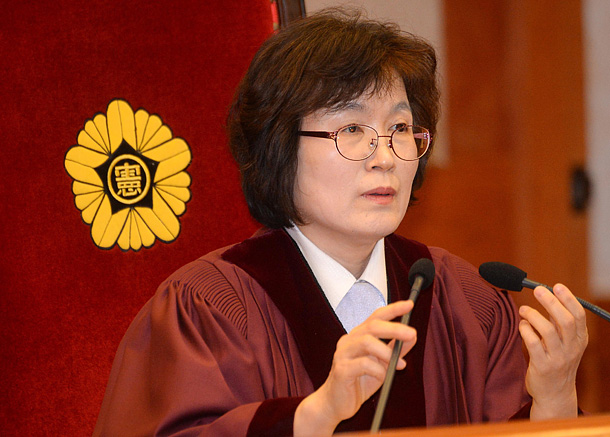 Former President Park Geun-hye’s conservative Liberty Korea Party said in a statement that it would “humbly accept” the court ruling and that it “deeply felt responsible for the outcome.”

The party said it would devote itself to political and national reform. In Myung-jin, the party’s acting head, said in a press conference he “deeply apologized” to the general public.

The Bareun Party, a breakaway from the Saenuri Party, the predecessor of the Liberty Korea Party, said the court’s decision proved they made the “right decision” to distance themselves from the “forces that betrayed the public.”

It also said it would work toward national integration and changing of the constitution in order to put an end to Korea’s “imperial presidency.”

Choo Mi-ae, chairwoman of the main opposition Democratic Party, said during a press conference that March 10, 2017, would be remembered as “civic honor revolution day.” Choo pressed the prosecution to dig deeper into the scandals surrounding Park and her close aides that led to the impeachment and removal.

Leading presidential candidate Moon Jae-in, former chairman of the Democratic Party, said through senior spokesman Park Kwang-on that it was time for the country to “come together as one” and that the court decision was a proven example of Article 1 in Korea’s constitution: “The sovereignty of the Republic of Korea shall reside in the people, and all state authority shall emanate from the people.”

South Chungcheong Governor An Hee-jung, another presidential contender from the Democratic Party, said it was a “victory of Korean democracy, victory of Korean history and victory for us all.”

Seongnam Mayor Lee Jae-myung wrote on his Facebook account that he welcomed the Constitutional Court’s ruling with “tears,” and that the country needed to thoroughly wipe away all irregularities to achieve “genuine integration.”

The Prime Minister’s Office said Hwang had urgent telephone calls with the ministers of national defense, interior, foreign affairs and finance to hand down orders for state management.

Hwang stressed military vigilance against North Korean provocations to Defense Minister Han Min-koo, while telling Interior Minister Hong Yun-sik to prepare for the next presidential election, which by law has to be held by May 9.