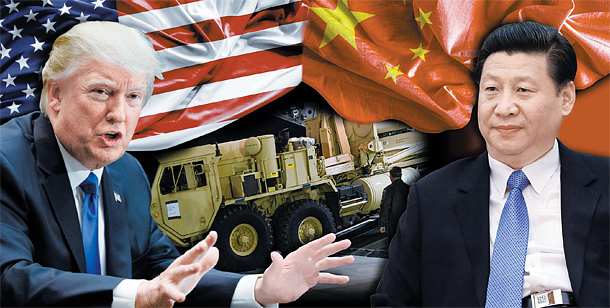 Last Wednesday, Chinese tech giant Tencent was scheduled to hold a press conference in Korea on its popular social media services including Weibo and WeChat.

But just one day before it was supposed to occur, Tencent’s Korea office canceled the event, saying its senior director, Benny Ho, couldn’t attend due to personal reasons. Speculation was wide in the Korean media that the last-minute cancellation was a result of Beijing’s protest against the Korean government for agreeing to deploy a U.S. missile defense system that China says threatens its security.

Tencent’s public relations office dismissed the rumors, maintaining that the event was not canceled but postponed for personal reasons.

On the same day, the International Electric Vehicle Expo, an auto show taking place in Jeju this weekend, released the list of participants this year, which included far fewer Chinese companies. The organizer said many had canceled their participation, shrinking the number of companies involved to 155 from the initial target of 200. Only high-ranking officials from Beijing Automotive Group and Geely Automobile will be visiting Jeju to launch a joint Korea-China electric vehicle association.

“Things are really difficult because of the Thaad problem,” said Kim Dae-hwan, the auto show’s chairman, referring to the controversial antimissile system.

And it’s not just China ratcheting up its economic retaliation against Korea. The United States has also intensified its criticism against Korea on trade imbalances. Last Monday, Peter Navarro, a top trade adviser to Donald Trump, accused Korean conglomerates Samsung and LG of unfair trade practices and hurting American companies like Whirlpool.

“I am amazed by how hard it is for our companies to compete on a level playing field,” Navarro said during an economic policy conference. “Two of the South Korean competitors, LG and Samsung, simply move the production to another country each time Whirlpool wins antidumping cases against them.”

Navarro called such “country hopping” cheating and insisted it stop, saying it has undermined international orders and even put Americans out of work. “It imposes millions of dollars of losses on companies like Whirlpool.”

Navarro’s strong criticism of Korean companies was followed by comments from U.S. Secretary of Commerce Wilbur Ross, who confirmed he would push ahead with Trump’s campaign pledge of putting American trade interests first by correcting imbalances.

“In the coming month, we will renegotiate bad trade deals and bring renewed energy to trade enforcement in defense of all hard-working Americans,” Ross said after announcing the United States’ January trade performance. “President Trump has made free and fair trade a central part of his agenda, and correcting this imbalance is an important step in achieving that goal.”

America’s trade deficit in January hit its highest in five years, raising the possibility that the United States may enforce protectionist policies. The trade deficit met market consensus at $48.5 billion, 9.6 percent higher than in December.

While Korea is the sixth-largest trading partner of the United States, accounting for 3.1 percent of trade, it is also one of the highest-ranking countries with which the U.S. has a trade deficit. In January, the deficit amounted to $2.3 billion, placing Korea within the top 10. China took the No. 1 spot with $30.2 billion, nearly 13 percent higher compared to a month earlier. China’s deficit is nearly half of the total. Germany came in second with $5.7 billion, followed by Mexico and Japan with $5.5 billion.

These are all countries that Trump has been attacking since his presidential campaign. China, Japan, Germany and Korea especially have a high chance of being labeled currency manipulators next month. They could face measures from the United States government that could limit their access to the American market.

The Trump administration appears to have already begun taking such steps. In January, the Department of Commerce imposed its first antidumping tariffs on Korean products, taxing Aekyung Chemical 3.96 percent and LG Chem 5.75 percent for imports of dioctyl terephthalate, an ingredient used in plastic. Then last week, the government imposed a 61 percent antidumping tariff on Korean shipbuilder Hyundai Heavy Industries for its power transformers. It was a much higher tariff than the preliminary rate of 3.09 percent.

A fight between whales

In Korean, there is a proverb that goes, “When whales fight, the shrimp’s back is broken.” As the world’s two largest economies spar over geopolitical matters, Korea seems caught in the middle. Beijing is chastising Seoul for allowing the United States to deploy a missile defense system in the region, and the United States is re-evaluating its free trade agreements with longstanding partners.

As both countries have stepped up their trade action this month, private think tanks in Korea are projecting a bleaker future for Asia’s fourth-largest economy. There are growing fears that Korea’s economy could further retreat to growth in the 1 percent range, which could be the slowest growth the country has experienced since 2009. Not only exports but the domestic economy could suffer a double-digit decline.

The state-run Industrial Bank of Korea released a report last week that estimated Korea’s economy might suffer a loss as high as $15 billion if China’s retaliation against Korea continues throughout the year. As a result, the nation’s economic growth might drop 1 percentage point from the previous 2.4 percent forecast.

The impact of China’s retaliation may well be stronger than the one inflicted on Japan during the territorial conflict between Beijing and Tokyo in 2010 and 2012, the report said. As a result of that conflict, Japan’s export growth to China plummeted 20.6 percent in 2011, and in 2012, Chinese tourists to the country dropped for 11 straight months. The report noted that Korea is in a more vulnerable position as it relies more heavily on China then Japan does.

Credit Suisse released a similarly bleak assessment last week where it projected Korea’s economic growth would drop 0.5 percentage points if the Thaad issue is not quickly resolved. The tourism industry in particular will suffer significantly since Chinese tour groups account for 43.3 percent of all Chinese visitors to Seoul.

Recently, the Chinese government banned travel agencies from sending tour groups to Korea effective on Wednesday. Credit Suisse estimates this ban will likely cost Korea $7.3 billion, the equivalent of 0.53 percent of the country’s GDP. This is based on the figure that group tourists spend $20.8 million.

Analysts don’t expect the situation to resolve itself any time soon. “Discussion between the U.S. and China will be key,” said You Seung-min, chief strategist at Samsung Securities. “There have been reports that the U.S. and China may hold a summit, where a compromise on Thaad could be reached, in early April. If things go badly, tensions could prevail until the G-20 summit in July.”

Although it is uncertain how much influence Korea will have on the dialogue between China and the United States, the conflict will come to an inflection point between April and July, You said.

The U.S. government’s aggressive trade policies are likely to add more burdens to an already strenuous situation. A report by Hyundai Research Institute earlier this year estimated Korea would suffer a loss of roughly $13 billion in the next four years under the Trump administration if the U.S. government takes protectionist action including renegotiation of the Korea-U.S. Free Trade Agreement. Annually, Korea’s exports to the United States will shrink almost $3.3 trillion while 32,000 jobs will be lost. This is roughly 10.7 percent of the 299,000 jobs added last year.

The damage doesn’t end there. If the United States raises tariffs against China, their exports to the American market will shrink 10 percent. In a ripple effect, Korea’s exports to China will likely retreat 1.5 percent, since Korea supplies many intermediate goods to China. Considering that last year, Korea’s exports to China amounted to $124.4 billion, Korea will suffer an estimated loss of $1.87 billion.

The Korean government is aware of these growing uncertainties but has not taken any specific steps to counter them. Instead, it has remained relatively optimistic over Korea’s exports.

“In February China’s exports grew 4.2 percent while imports expanded 44.7 percent, which shows that while the global economy isn’t bad, China is significantly increasing imports of raw materials and capital goods,” Joo said. “The recovery of exports is contributing to production and investment.”

The Korean government is hoping for a diplomatic solution. Top trade officials are meeting with Chinese and American counterparts to work through concerns.

According to the Korean Trade Ministry on Thursday, its minister, Joo Hyung-hwan, met with his American counterpart Wilbur Ross in Washington during a four-day trip there. The ministry said the two discussed the bilateral free trade agreement and its benefits, including expansion in investment and job creation. They agreed to further strengthen cooperation.

However, the ministry did not mention whether the two talked about the United States’ hard-line stance against Korean businesses. It instead stressed the achievement of establishing a channel with the new U.S. administration.

Korea’s finance minister, Yoo Il-ho, plans to meet with Chinese and American counterparts in Baden-Baden, Germany, where economic ministers and central bank governors from the G-20 will meet this month.

Some experts say large conglomerates like Samsung and LG are not likely to be harmed by China’s backlash or America’s protectionism as they have already taken shrewd steps like building factories in other countries.

“Samsung and LG have expanded their production plants away from China to more than 20 countries including Thailand and Vietnam,” said Kim Dong-won, a researcher at KB Securities. “Additionally, these companies are in the process of building plants in the United States.”

In the Chinese market, Samsung occupies just a 5 percent share despite being the world’s top smartphone seller, while LG has a smaller presence with less than 0.1 percent. There has been speculation that LG might not even launch its flagship G6 smartphone in China in order to focus on advanced economies. This is expected to further protect the Korean conglomerate from any losses that may come from China’s trade retaliation.

To counter the growing tide of protectionism in the United States, the two Korean conglomerates have already been taking steps to building factories in America. LG announced last month that it would invest $250 million in building a washing machine plant in Clarksville, Tennessee, and have it up and running by the first half of 2019. Samsung is said to be mulling a facility in one of several states including Alabama, South Carolina and Tennessee. It’s expected to invest roughly $300 million.

The real losers are likely to be small and midsize companies, particularly those that have expanded to China. According to the Korea Trade-Investment Promotion Agency, there are 3,582 Korean companies operating in China, about 42 percent of which are targeting the Chinese market. Those whose main business is exports only make up 20 percent. Of those companies, 58 percent are small and midsize businesses, and only 27 percent are conglomerates.

The Korean Small and Medium Business Administration last week decided to expand the budget supporting Korean small and medium-sized exporters by an additional 50 billion won ($43 million) to 125 billion won. The money will be used to provide low-interest loans to companies that have been affected by trade retaliation from the Chinese government. Each company can receive up to 1 billion won at 3.35 percent interest.