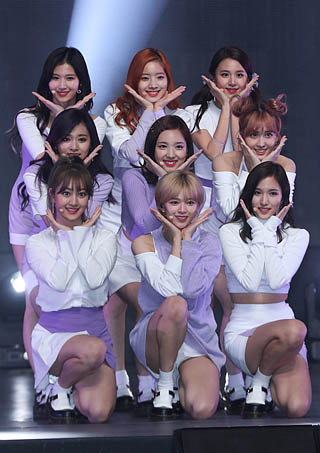 Always a hit and never a miss, the Korean girl group Twice has proved again, as it bows out from publicity appearances on Sunday for its latest hit “Knock Knock” following a raving reception.

“Knock Knock” is the lead track off Twice’s new album “TWICEcoaster: LANE 2,” which came out on Feb. 20. Upon release, it immediately topped most streaming service charts, including Melon, Mnet and Naver Music. The team ends media promotion for the song through SBS TV’s pop music program “Inki Gayo.”

The track is Twice’s fourth-consecutive No. 1 song - others being “OOH-AHH,” “Cheer Up” and “TT” - since its debut, a remarkable streak for the nine-member team just launched only about a year and a half ago.’

“TWICEcoaster: LANE 2” is a “special album”, as opposed to a full-length album, meaning that it has new songs but also includes repackaged old tracks as well. But it has so far sold over a whopping 270,000 copies in just three weeks.

The song, whose title refers to the act of knocking on a door, incorporates bubblegum pop and weaves electronic and rock elements into its catchy chorus.

The soundtrack is bright, cheerful and syncs perfectly with the energetic choreography. In the music video, the members come together in mix-matched attire and “knock” their way through the dance, highlighting the key dance moves so that fans could easily follow.

“Melting,” another new song from the new record also fared well, having taken a seat amongst the top five on most charts since release.

The music video for “Knock Knock” also stormed video streaming Web sites, racking up more than 40 million views on YouTube. At the current rate, it is expected to become the fastest K-pop group music video to top 100 million views, by breaking Twice’s own previous record set by “TT.”

Following the “Knock Knock” activities, Twice is expected to busy preparing for its Japanese debut set for June.

The team will be releasing a compilation album titled “#TWICE” which consists of 10 songs including both Korean and Japanese-language versions of “Like Ooh-Ahh,” “Cheer Up” and “TT.”