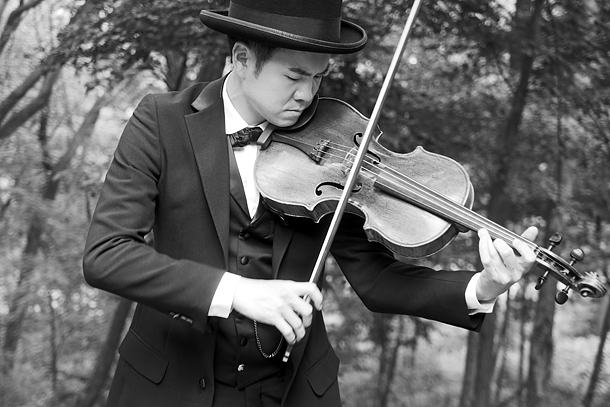 The Concert Hall in the Seoul Arts Center holds 2,523 seats. In 2007, during the first performance of Ensemble DITTO, 1,680 people bought tickets. The following summer, the number increased to 2,350. Since then, the annual summer show by Ensemble DITTO filled more than 90 percent of the seats.

“We couldn’t have expected this kind of reception ten years ago,” says the team’s leader, viola player Richard Yongjae O’Neill. Ensemble DITTO came together, he says, for the joy of chamber music. “It started from a very simple idea: Why do performers complete Beethoven’s nine Symphonies and his 32 Piano Sonatas but not the 16 String Quartets?” O’Neill says chamber music is somewhere between soloists and large orchestras. Ensemble DITTO is capable of performing everything from a duet to an octet. There are no fixed members. The composers and pieces are chosen first and the performers chosen later.

The performers are young male Asians. Women account for 90 percent of the audiences, and around 70 percent of them are between the ages of 25 and 39.

“The combination of performers and the marketing was done by the production agency,” says O’Neill, “I relied on the idea that the audience sees the value of chamber music.” He believes that chamber music can be compared to a drawing that precedes a painting. “The drafts of artists like Picasso and Raffaello show signs of genius from the artist.”

In the first year, O’Neill introduced works such as Johannes Brahms’s Piano Quintets. Starting from Bach, he chose more complex modern music later. This project was possible due to O’Neill’s wide range of interests in instruments and styles other than his own instrument. “I wanted to explore the works of Bach and Beethoven, but viola pieces were a rarity. I had to look at the big picture through works made for other instruments.” He has studied solos for other instruments and orchestra pieces as well.

O’Neill believes audiences have become much more familiar with chamber music over the past decade. He also learned what kinds of chamber music the audience prefers. “Schubert and Beethoven are popular, but the real winner was Tchaikovsky. The audience reacts instantly to his melodies. The audience adjusts well when the rhythm is hard, but when the harmony becomes much more complex, they seem to have a hard time [following the music].”

He learned from his mistakes as well. “The artist that I chose for Ensemble DITTO’s fourth concert, 20th century composer Zoltan Kodaly, was a failure. The melody and the chords were too ambiguous and I felt that the audience had a hard time.” He was also faced with a dilemma regarding length. “I have a lot planned for Ensemble DITTO concerts, but I don’t want to torture the audience.”