From left: Hakgojae Shanghai closed its gallery in January; PMC Production decided to temporarily close its Chungjeongro Theater for its non-verbal “Nanta” show starting next month. The show has been especially popular among Chinese tour groups; Pianist Paik Kun-woo’s scheduled concert for this month was also canceled; China dropped its plan to invite ballerina Kim Ji-young of the Korea National Ballet to perform with the Shanghai Ballet next month. [YONHAP, JOONGANG ILBO, VINCERO]

China’s boycott against Korean culture is in full swing. The country that once was the largest fanbase for Korean stars, television programs, K-pop and so much more is shunning not just its popular culture, but also the fine arts, expressing their growing discontent to Korea’s plan to install the U.S. Terminal High Altitude Area Defense (Thaad) antimissile system.

It started with removing Korean celebrities from China’s TV commercials, dramas and reality programs, followed by halting all joint productions of Korea-China dramas and films. Then recently, the country went a step further and began rebuffing scheduled events of Korean artists in China and even canceling its own events in Korea. 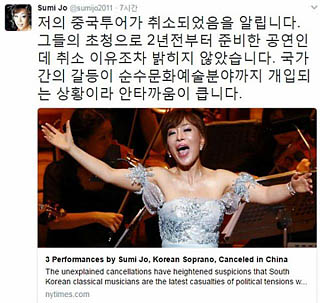 Korean soprano Sumi Jo posted on her Twitter on Jan. 24 stating that China has canceled her tour without giving reasons and that “It is pitiful that the conflict between two countries has involved even the fields of fine arts and culture.” [SCREEN CAPTURE FROM TWITTER]

Early this year, news reports of canceled China concerts of soprano Sumi Jo followed by pianist Paik Kun-woo’s concert were signs that the two countries’ diplomatic feud had even affected Korea’s classical music industry. The shows were called off due to the unapproved visas of the artists. Jo complained about the situation via Twitter on Jan. 24 saying that it is “pitiful that the conflict between two countries has involved even the fields of fine arts and culture.”

But it didn’t stop there.

More recently, growing numbers of Koreans in the arts fields are falling victim to China’s retaliation.

To celebrate 25 years of Korea and China’s diplomatic relations, five national and private museums and galleries in Korea, including the Gyeonggi Museum of Modern Art, were to hold an anniversary exhibition sponsored by the Chinese ministry of culture. However, the plan was scrapped as the “Chinese organizers suddenly informed organizers last fall that they can no longer hold the exhibition in Korea,” said Choi Eun-ju, director of the Gyeonggi Museum of Modern Art. “We’ve been talking about the exhibition as early as beginning of last year and numerous agreements had been made.”

Although the Chinese organizers did not specify the reason for scrapping the plan, Choi said that the Korean art community believes that the Thaad issue was the major cause. The anniversary exhibition was to be co-hosted by Korean Culture Ministry’s International Exchange Foundation and the People’s Daily, China’s state newspaper.

Korean artist Byoungho Kim, who was preparing for his solo exhibition at the Arario Gallery in Shanghai, also told the Korea JoongAng Daily that he’s not sure at this moment if he can hold the exhibition which is scheduled to begin on April 8, as the license to ship his works to China hasn’t been approved yet. Kim said that shipping usually takes place about a month before the exhibition, so not yet being approved is incomprehensible.

The Arario Gallery in Korea has decided to postpone Kim’s exhibition and allow a Chinese artist who was to exhibit after Kim take his spot because of the unexpected situation.

“It is difficult to check what had happened or what the reason of the cancellations was with every single organization that suffered from the unexpected rebuffs,” said an official from the Korea Creative Content Agency. “However, by considering the high number of cases that have experienced a similar situation, it’s hard to deny that the main reason is the Chinese government’s ban on Korean content to retaliate against the Thaad installment.”

Not simply stopping at rejecting Korean culture coming into China, it seems like the Chinese government is even considering banning Chinese cultural content from being enjoyed by Koreans.

On Wednesday, JK&Company, which has been organizing the Beijing Philharmonic Orchestra’s concerts in Seoul and several other cities in Korea in October, said that the Chinese orchestra informed them that the concerts are no longer happening.

“We were in the middle of discussing some conditions before signing a contract but suddenly an email came saying that they can no longer come to Korea,” said an official from JK&Company. “We were not informed of the reason.”

The orchestra last visited Korea in 2007 to celebrate the 15th anniversary of Korea and China’s diplomatic relations. The October visit was also planned to mark the 25th anniversary.

The consequences of this political feud are left for Korean artists and the industry to bear.

Concerned about the worsening relationship between the two countries, Hakgoje Shanghai, a Korean art gallery that was established in the Art Zone of Putuo District in Shanghai, decided to terminate its operation in China as of Jan. 15. The gallery opened doors to Chinese visitors in December 2013 and had introduced numerous Korean artists to China.

“The decision was a preemptive measure taking the whole situation in China into consideration,” said Woo Chan-kyu, president of Hakgojae. “I always thought that the regulations are quite strict to operate a commercial gallery in China. That situation was topped off with the heightened tension between the two countries and we’ve been thinking about looking for alternatives like [moving the gallery to] Hong Kong.”

PMC Production also decided to temporarily close one of its four theaters housing the popular non-verbal performance, “Nanta.” Since its premiere in 1997, the show that mixes traditional Korean sounds and dynamic performances and a witty storyline, has been especially popular among foreigners. Due to the location, the Chungjeongno Theater in central Seoul often had sell-out shows thanks to Chinese tour groups.

“The Chinese audience has been decreasing gradually since last year, and recently, the number was lowered almost to nil as the Chinese government urged its people not to travel to Korea,” said an official from PMC Production.

Police officers guard the gate of the Chinese Embassy in Seoul as tensions between the two countries rise as the Thaad antimissile dispute intensifies. [YONHAP]

From next month, the theater will be closed for two to three months. However, with the ban recently proclaimed by the Chinese government forbidding Chinese travel agencies to provide group tours to Korea from March 15, it seems like an outright closure may have to be an option.

“We will watch how the situation develops. An outright closure won’t be ruled out,” the official added.

Meanwhile, according to a 29-year-old Chinese woman living in Shanghai who requested only to be identified by her surname Yang, people in Shanghai are aware of the current political situation between the two countries, however, “seem to find their own ways to still consume Korean culture.”

“We have no problem watching Korean TV programs, for example, because we can watch them online,” said Yang. “It’s a pity that we can’t see Korean celebrities on our television as much as we used to but we can just see them on Korean programs on the Internet so that’s not a problem.”

Upon a question about the current political situation beginning to affect even the arts community in Korea, Yang said that she’s never heard about it and that she feels like “it was unnecessary for the Chinese government to go that far, and cross that line.”

“Of course some ardent fans of Korean arts will notice the ban, but most of the people in Shanghai, as far as I’m concerned, are not that interested in the field,” she said. “Moreover, people in Shanghai don’t really seem to care about the details of what’s banned and what’s not. Everyone is just busy making a living. Plus, we believe many of the news that we read online that say China is angry at Korea because Koreans are helping the U.S. is exaggerated.”

However, Yang added that since more and more Chinese people are avoiding traveling with tour groups organized by travel agencies, “not because of the government’s ban but because many people have begun to express dissatisfaction about the tour programs, it will be a good idea for the Korean businesses like ‘Nanta’ organizers that relied heavily on group tourists from China start looking for a different system to sustain their businesses.”

Despite receiving incomprehensible rebuffs from China, most Korean organizers were reluctant to point their fingers right at China and call it an act of retaliation.

Shin Chun-soo, producer of OD Company that recently created an English-language world touring version of the popular musical “Jekyll & Hyde” by casting Broadway actors spoke with confidence last December that his company is working closely with the Chinese production team to stage his musicals and despite the tension between the two countries, many things have been decided.

However, during the press conference held Thursday to kick off the Seoul premiere of “Jekyll & Hyde” at the Blue Square in central Seoul, Shin moved a step backwards and said that “it’s difficult to say anything about how [the business] with China is going.”

“The Thaad issue of course is very serious between the two countries, therefore, I can’t help being discrete about making remarks,” said Shin. “My words may affect the situation of not only my production company but also the other [Chinese] counterpart.”

Shin added that he still believes that “the performing arts market will grow in Asia, with China in the center” and that what the production companies from both countries can do at the moment is to talk about the right timing, while continuing to develop the quality of the works until things get resolved.

But like others who were hesitant to blame Thaad as the result of their current situation, Shin said, “Honestly, I didn’t expect [this kind of] political issue to affect Korea’s arts industry as seriously.”