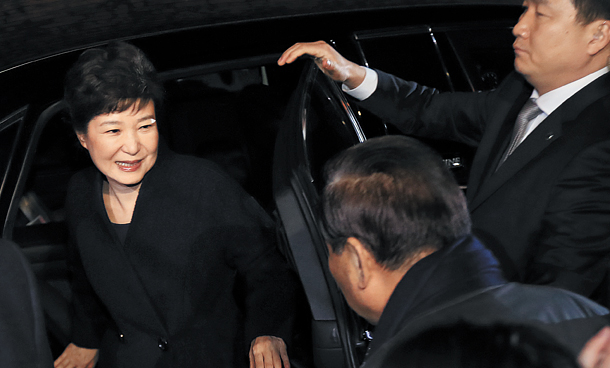 Former President Park Geun-hye left the Blue House on Sunday, two days after she was dismissed from office, without accepting her impeachment and removal.

Park left the presidential compound at around 7:20 p.m. Sunday for her private residence in Samseong-dong, southern Seoul.

Former presidential chiefs of staff and lawmakers loyal to Park greeted her outside her residence and she chatted with them, smiling, for about six minutes.

“I express my gratitude to people who have supported and trusted me,” Min read. “I will take all responsibility. Though it may take time, I believe the truth will eventually prevail.”

Park’s days of silence led to criticism. The former president’s critics say she should have addressed her supporters and told them to accept the ruling. Three of Park’s supporters died at protests held on Friday and Saturday.

It is being reported that the court’s ruling came as a deep shock to the former president.

Since Friday’s ruling, repairs such as fixing a heating system have been done at her private residence, as well as setting up an internet connection and layers of security. An area for her security guards inside the residence has been set up.

Park lived in the Samseong-dong residence from 1990 until her move into the Blue House in early 2013. It has been vacant for the last four years.

Around 800 policemen were dispatched to the residence to await her return.

Nearly 600 supporters also gathered at the residence, showing their unwavering support for the disgraced former leader.

The fact that no repair work had been done until after the court’s dismissal fueled speculation that Park believed the court would reject the impeachment motion - or at least one of the two court judges appointed by her would do so.

If the trial had been prolonged beyond the retirement of acting chief justice of the Constitutional Court Lee Jung-mi, only two dissenting votes would have been needed to restore Park to the presidency.

Attention is now on the former president’s legal fate now that she has lost the immunity from criminal prosecution allowed to the Korean president.

Park’s staying at the Blue House over the weekend raised concerns that she may have been destroying evidence at the compound that could be used against her in the prosecution of a bribery scandal implicating Park and her friend Choi Soon-sil.

Park’s statement is seen as her refusal to accept the court’s ruling and denial of accusations against her.

There are now debates over whether Park should be summoned for questioning as a suspect in the so-called Choi-gate scandal before or after the presidential election, which is likely to be held around May 9.

Presidential frontrunner Moon Jae-in of the Democratic Party said Sunday the prosecution had no reason to delay their questioning of Park. On whether she should be detained, Moon said it was inappropriate for him and other presidential runners to comment on it as it is a legal matter.

Moon, who lost to Park in the 2012 presidential race, also called on Park to formally accept the court’s ruling.

The Liberty Korea Party, which lost its ruling party status with Park’s removal, is split between two factions: One rejecting the court’s judgment and the other accepting it. In Korea, the party of the president is considered the ruling party even if it does not control a majority of the legislature.