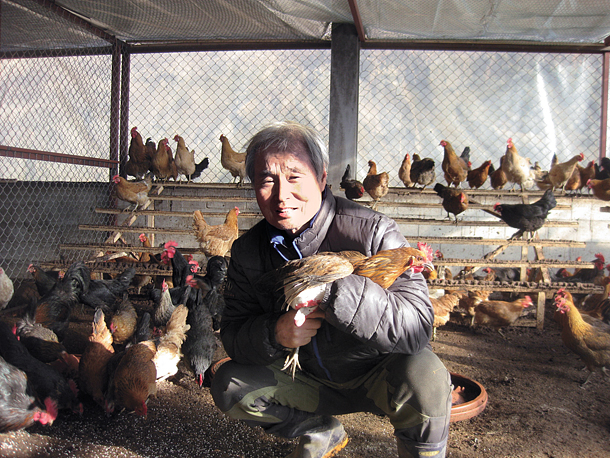 Song Jae-mun, head of production at the Goshen Farm, is examining a hen in Namyangju, Gyeonggi, where about 10,000 native Korean chickens are raised. [JEON IK-JIN]

Native Korean chickens at Goshen Farm are raised free-range and fed a special nutritious feed, contrary to conventional chicken-raising practices, which use factory-style cramped cages. This isn’t altruism, however, as the farm expects its returns in the form of disease prevention and higher quality poultry.

On the afternoon of March 5 at the Goshen Farm near Mount Yebong in Namyangju, Gyeonggi, about 10,000 chickens pecked and dug into the earth for insects while gliding around the 161,000 square foot space. The flocks of black, yellow, tan and dark brown native Korean chickens are the result of chickens initially being raised free-range 30 years ago.

The farm believes the secret to raising healthy and disease-resistant chickens is incorporating environmentally friendly feed with fermenting agents and nutrients.

“After consultation and cooperation 20 years ago with the Namyangju municipal government,” said Song Jae-moon, 71, head of production at the Goshen Farm, “they are fed a mixed feed, fermenting agents composed of microorganisms such as lactobacillus bacterium and citric acid, left to ferment for 24 hours.” No antibiotics or hormones are used.

Compared to foreign species, native Korean chickens are physically smaller, taking six to seven months to bring to market, four to five times longer than other chickens. Their egg-laying capacity is also less productive, at a quarter of the rate. On the other hand, Korean chickens and eggs are financially competitive, demanding a price threefold the market price.

After two to three months, broiler (meat production) and layer (egg production) chickens are raised free-range. Chickens start to graze between 10 a.m. to 2 p.m. and spend their time in the open until 5:30 p.m. to 7 p.m. They then return to their coops and avoid the risks of attack from wild animals. Ten chickens are housed per 35 square feet in the comparatively spacious eight broiler and three layer coops available.

However, the farm reduced the free-range duration by two to three hours in order to avoid potential contact with migratory bird droppings from flocks northward bound, for fear of avian influenza infection.

“We raise 20,000 chickens, but there was not even a single case of avian influenza infection occurring throughout this time,” Song said. “Fatal and highly infectious viruses such as Newcastle Disease (an acute respiratory disease) have not appeared in these 10 years.”

Goshen Farm also augments their nutritional disease prevention with disinfection facilities installed at its entrances and preventative disinfection of outgoing transports is mandatory. The disinfection of chicken coops is also done in advance daily.

“The process of raising native Korean chickens close to the conditions of nature,” said Lee Gyeong-ung, 71, founder of Goshen Farm and chairman of Goshen Biotech, “with environmentally-friendly feed can be called the achievement of animal welfare animal husbandry.”

“If one raises native Korean chickens free-range and feeds them microbial fermenting agents and supplements in their feed,” said Yeon Sung-hum, head of the Animal Genetic Resources Research Center at the National Institute of Animal Science, “their immune system can be strengthened.”