Anyang KGC keeps one step ahead of the crowd, while Thunders try to regain pace

Anyang KGC keeps one step ahead of the crowd, while Thunders try to regain pace 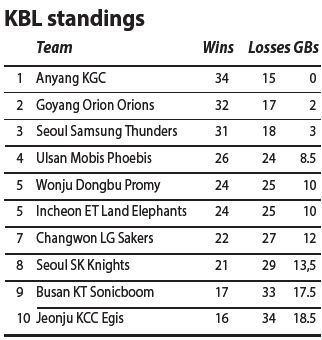 Keifer Sykes and David Simon played a significant role over the weekend, as they were the leading scorers in all of Anyang’s games. The KGC started its weekend by winning 82-73 against the Seoul Samsung Thunders, who moved down to third.

Although the KGC was better in overall standing, when the two team’s head-to-head standings were compared, the Thunders led with four wins and one loss.

Despite the duos’ outstanding performance in other games, they were always unable to perform against the Thunders. But this time, Keifer Sykes led with 23 points, seven rebounds and eight assists while David Sykes recorded 22 points with six rebounds and two assists.

In addition, with the 81-66 win against the Ulsan Mobis Phoebis, the KGC finishes the weekend strong, now undefeated for two weeks. The team’s record has now improved to 34 wins and 15 losses, widening its gap with the Goyang Orion Orions, the second ranked team, to two wins.

The KGC will travel to Incheon to play against the Incheon ET Land Elephants on Thursday for a chance to widen its gap from the second ranked team, the Goyang Orion Orions.

While the KGC dominated the league, there was a shift in the ranking as the Orions took down the Thunders from the second spot. The Thunders had a disappointing weekend, losing both their matches and dropping to third in the ranking. 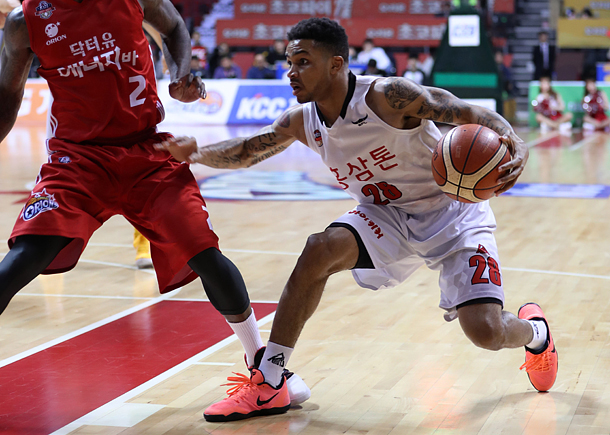 Now, the Thunders will have to try to move back up, as the team is only one win apart from the Orions, who are currently ranked second.

Keifer Sykes continues to prove his ability as the season nears its end. After being on the verge of getting kicked off the team due to poor performance, Sykes is now a player that the Anyang KGC must have.

Over the weekend, the KGC’s Sykes and David Simon led in two of its games. Against the Seoul Samsung Thunders on Friday, Sykes scored 23 points with seven rebounds and eight assists.

Earlier in the season, the KGC considered exchanging Sykes for Eric Wise of the Jeonju KCC Egis, as Sykes is short compared to other players in the Korean Baseketball League. But based on Sykes’ outstanding performance in three games over the New Year’s holiday, the KGC decided to continue its season with Sykes, and since then, he’s been one of the key players on the team.

Not only was he able to prove his ability, he also proved to the team that he does well under pressure. Throughout the season, he has averaged 14.8 points with 2.9 rebounds and 4.4 assists in 49 games.