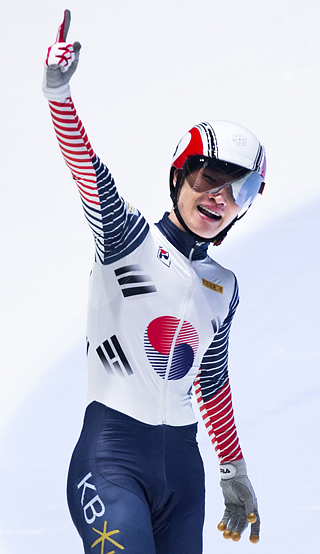 Seo was crowned the overall champion at the International Skating Union (ISU) World Short Track Championships in Rotterdam, the Netherlands, on Sunday. Seo won the men’s 1,000 meters, adding to his bronze medals from the 500m and 1,500m. Seo then finished second in the 3,000m super final and ended with 81 ranking points, eight ahead of Sjinkie Knegt of the Netherlands.

At the world championships, skaters are awarded points based on their finishes in each race. Seo is the first Korean man to win the world overall title since Sin Da-woon in 2013.

Under the Korea Skating Union (KSU) rules on the Olympic team selection, Seo received an automatic berth to the 2018 PyeongChang Winter Olympics on home ice. The KSU said it would award a spot to a skater finishing inside the top three overall at the world championships. In case there were multiple Koreans among the top three, then only the highest-ranked skater among them would get the Olympic berth.

On the women’s side, Shim Suk-hee got her automatic spot by finishing third overall.

Shim, the 2014 overall champion, picked up her only gold medal in Rotterdam at the 3,000m super final. She had 52 points overall, finishing behind Elise Christie of Britain (89) and Marianne St-Gelais of Canada (68).

Choi Min-jeong, the 2015 and 2016 champion, ended in sixth place this time after getting shut out of medals.

Kim Ji-yoo, the youngest member of the women’s team at 17, earned 39 points to rank fourth overall.