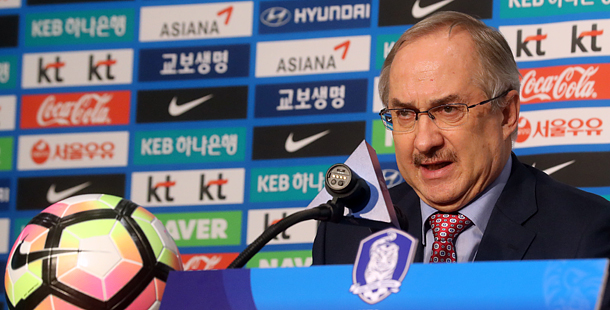 Uli Stielike, manager of the Korean national football team, announces its 24-man roster during a press conference in Seoul on Monday. [YONHAP]

Uli Stielike, manager of the Korean national football team, announced a 24 men roster for its two Asian World Cup qualifying rounds against China and Syria during a press conference in Seoul on Monday.

As expected, Son Heung-min has been added to the national team, but unfortunately, fans will not be able to watch his performance during its game against China due to accumulated yellow cards.

“I am aware of the importance of the two qualifying matches,” Stielike said. “It’s unfortunate that the injured players can’t play but this may be an opportunity for other players.”

With that, it had been a big concern of Stielike as to who will fill Son’s spot. Rather than looking for players in the foreign league, Stielike changed his approach to include more K-League players on the team.

“I will prove that the K-League players are as good as the players playing in the foreign league,” Stielike said.

Kim has been one of the top forwards in the K-League as he won a scoring title while he was with Ulsan Hyundai two years ago. Lee, who plays in the K-League challenge, was a surprise addition to the Korean national team last year, but despite fans’ concerns, Lee managed to score five goals in 16 matches.

Heo Yong-jae, midfielder for the Jeonnam Dragons of the K-League, got an opportunity to join the senior national team for the first time as he is playing as a replacement for Lee Jae-sung of the Jeonbuk Hyundai Motors, who was out for several weeks with a leg injury. Heo is Stielike’s surprise pick and hopes to see a great performance just like he did from Lee Jeong-hyeop the previous year.

“It wasn’t only the two matches, I’ve been watching him since last years,” Stielike said.

As a manager of the team, Stielike said he tries to look at younger players rather than having same members all the time.

By doing so, this give possibilities to younger players that if they work hard, they can be on the national team. During the selection process, Stielike is trying to keep all his options open.

“At this point, I’m not sure who will be the starting midfielder,” Stielike said. “Since I have a lot of options like Koo Ja-cheol, Nam Tae-hee and Ji Dong-won, I’ll have to consider the possibilities and game plans.”

Although Stielike left out most of the injured players, he included Ki Sung-yueng and Kwak Tae-hwi in the roster.

“Even if Ki and Kwak can’t play, their experience and leadership will help the bench members going,” Stielike said.

The addition of Ki and Kwak will be confirmed over the weekend as their injury heavily affect whether they will join the team or not. If Ki finalizes his decision not to join the team, Steilike will have Kim Bo-kyung as his replacement.

Stielike was not able to have many of his first pick players join the team due to injuries but he showed satisfaction with the selections and he expressed his desire to win against China next week.

The team’s trip to China will be its third away game. During the team’s first match against Iran, the team lost focus in the game, as they were unable to concentrate due to religious events and the environment surrounding the stadium.

“Our away game against Iran was probably the most disappointing game because we weren’t able to play our own game,” Stielike said.

The key in the team’s sixth qualifying match against China will be to focus in their own game and not get affected by the surrounding atmosphere, which they hopefully learned from its game against Iran.

After the team’s match against China, they will return to the Seoul World Cup Stadium to host Syria for its seventh qualification round game on March 28.