Gov’t seeks to give ISAs a reboot

Gov’t seeks to give ISAs a reboot 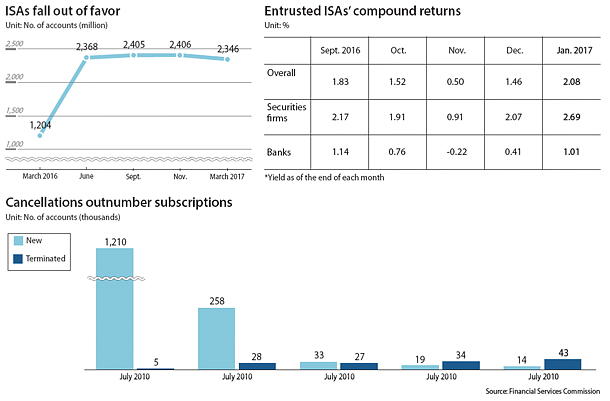 An individual savings account, or ISA, allows consumers to manage investments in multiple financial products such as funds and derivative-linked securities through one account. When it was launched last March, major banks and securities firms advertised the product aggressively to bring in more subscribers. Along with the benefit of one-stop financial management, no taxes are levied on profit up to 2 million won ($1,740).

By the end of March last year, over 1.2 million people had opened an account. Three months later, the number skyrocketed to 2.37 million and reached a peak of 2.41 million by November. But the fever was short-lived, and the public’s interest died as quickly as it came. The number of accounts began decreasing in December, and as of March 3 this year, about 60,000 people have closed their accounts.

Despite the figures hinting at dwindling interest, the Financial Services Commission said in a report Monday that although accounts with a small amount of money - below 100,000 won - are being closed, the average amount per account has actually been increasing. Between March last year and this year, the average amount grew 2.8 times to 1.55 million won from 550,000 won.

One strike against the ISA, though, is the average rate of return. Compound returns for entrusted ISAs where investment strategy is handled by asset managers have been fluctuating, but they have never exceeded 3 percent in the past few months. Up until September 2016, the ISAs recorded 2.17 percent returns, but by November, it plummeted to 0.91 percent. As of the end of January this year, the figure stood at 2.69 percent.

The yield is even lower with entrusted ISAs at local commercial banks, where compound returns went from 1.14 percent in September to negative-0.22 percent in November until climbing back up to 1.01 percent by the end of January this year.

The Financial Services Commission, however, said it was “inappropriate” to use the yield of entrusted ISAs as a reference for overall performance since they account for 10 percent of all accounts. “ISAs are intended for long-term investment,” the commission said, “which means the rate of return from just a few months isn’t enough to assess the product.”

Still, the regulator is well aware that the number of subscribers has been stuck at just upward of two million and acknowledged the need to improve benefits. “We will work closely with related government departments to improve the system, including expanding the target subscribers, providing more tax breaks and allowing withdrawal before maturity,” the commission said.

Many in the industry are welcoming the changes, saying tax benefits might compel more people to sign up for accounts and maintain them.