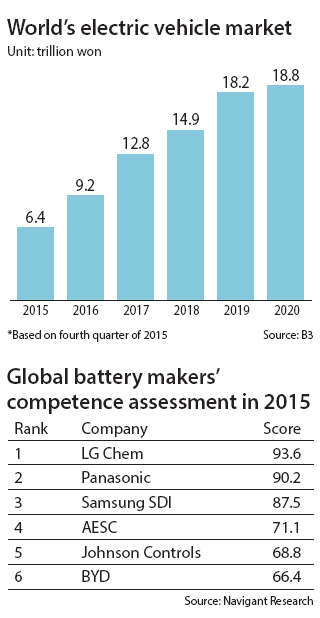 Many manufacturers of batteries see electric cars as a future bread-and-butter business. The vehicles depend on quality batteries, and the field is ripe for growth. For the past three decades, the battery industry has been dominated by LG Chem, Samsung SDI and Japan’s Panasonic. The Chinese government is trying to change that with a host of measures supporting local players, helping them expand production capacity while restricting foreign rivals from benefitting in the massive Chinese market.

The announcement follows restrictions placed by the Chinese governments on foreign companies including Korean players, which opened factories there in 2015. LG Chem built a plant in Nanjing with the capacity to produce enough batteries to power 50,000 electric cars a year, while Samsung SDI built factory capable of supplying 30,000 electric vehicles in Xi’an. A year later, the Chinese government dropped the two companies from its list of approved battery suppliers.

LG and Samsung applied for certification last June, but both failed, a Samsung SDI spokesperson said. Both companies are waiting for another try, but no progress has been made yet.

The spokesperson noted that the certification is not a must for business in the country, as companies can still operate factories and sell without the certification, but it could disadvantage them in the future should regulations change, which is why firms are scrambling to get approval.

In further efforts to bolster local battery makers, Beijing proposed a guideline at the end of last year saying car battery makers would need at least 8 gigawatt hours of production capacity in China to qualify for subsidies on electric car purchases. In the past, the limit for production capacity was 0.2 gigawatt hours. The guideline would only allow Chinese companies BYD and CATL to benefit from the subsidies, according to industry sources.

Already, electric cars with batteries from LG Chem and Samsung SDI have been taken off the Chinese government’s subsidy list. Last December, China released a list of 498 eco-friendly cars eligible for government subsidies but a few hours later revised the list to exclude five models running on batteries from LG and Samsung. There is speculation that they were knocked off because the suppliers were Korean, as 50 cars on the subsidy list had Chinese batteries that were not yet certified by the government.

As risk from the Chinese market grows, Korean battery makers are mulling other options.

“We think the discrimination of foreign companies may continue for the time being,” Kang Chang-beom, a vice president at LG Chem, said earlier this year. “We will use batteries produced in China for export to other countries in Asia and for our energy storage systems to partly ramp up operation of our facility in China.”