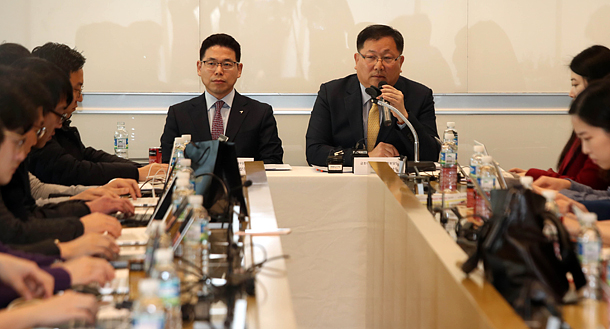 Kumho Tire, a business affiliate of Kumho Asiana Group, may not end up in the arms of its chairman Park Sam-koo, as his request to establish a consortium to raise funds is still being rejected by its main creditor Korea Development Bank.

In the meantime, Doublestar, a Chinese tire company which was selected a preferred bidder in January, signed a share purchase agreement with creditors Monday, finalizing the purchase price of Kumho Tire’s 42.01 percent stake at 955 billion won ($832.7 million).

If Park doesn’t come up with at least 955 billion won within the next 30 days, exercising his right of first refusal, the stake in question will be handed over to Doublestar, making it the largest shareholder of Korea’s second-largest tire company.

Kumho Asiana Group told reporters on Monday that if the creditor banks continue to disallow Park to form a consortium, the group will withdraw from the bidding.

“Under the current financial situation, it is quite difficult to acquire the stake solely on financial investors,” said Yoon Byong-chul, the group’s chief financial officer, at its headquarters in central Seoul on Monday. “The group will give up the right of first refusal if we are not allowed to set up a consortium and secure strategic investors.”

The group simultaneously unveiled two documents sent to Kumho Tire’s creditors on March 2 and 6, including the KDB, Woori Bank and KB Kookmin Bank in the name of Park and his eldest son Park Se-chang, the group’s CEO, asking for approval to form a consortium so that third parties can join Kumho Asiana’s desperate attempt to reacquire the tire business.

“KDB didn’t even take our request into consideration,” the group said in a statement Monday. “While the creditors allowed Doublestar to form a consortium with six companies, it is not understandable why it doesn’t allow Kumho Asiana to do the same.”

However, its main creditor bank maintained that allowing Park to form a consortium now will “jeopardize the rights of all related business entities including other creditor banks as well as the Doublestar.”

“It is impossible to allow Park to establish a consortium all of a sudden when a share purchase agreement has been signed,” a spokesperson at KDB said. “It is quite absurd to ask for such thing when the entire process has come to an end. If the request has come earlier, forming a consortium would have been a plausible option,” the spokesperson added.

Kumho Asiana Chairman Park has been determined to buy back the tire company that his father Park In-cheon founded in 1960.

After losing the management right in 2009 when its parent company Kumho Asiana ran into a severe liquidity problem, Park was granted the right of first refusal in 2010 by creditors. With the right, Park can buy back the company’s management right as long as he can pay the same amount as the highest bidder.

Park recently set up a special-purpose company to lure investment to repurchase the tire business unit. He has been saying that he has secured enough capital to buy back the tire company since Doublestar has been selected the preferred bidder. However, analysts are skeptical that he has managed to secure near 1 trillion won.

Doublestar said that Kumho Tire’s management and operation will run independently even after it succeeds in becoming its largest shareholder.