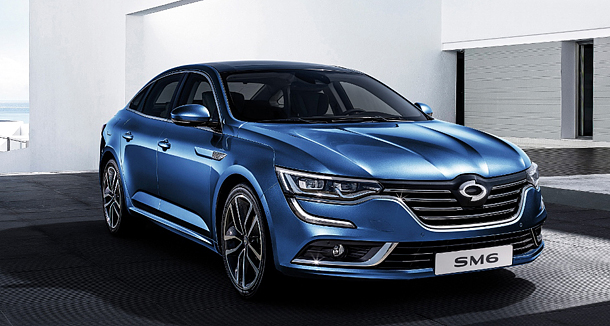 The price of Renault Samsung Motors’ 2017 model of its flagship SM6 midsize sedan has risen as much as 600,000 won over the price of its 2016 model. [RENAULT SAMSUNG MOTORS]

Renault Samsung Motors, a Korean subsidiary of French automobile manufacturer Renault Group, has come under fire in the local media in the last couple of days for increasing the price of its vehicles without notifying consumers, a claim the company denied on Monday.

Yonhap said analysts criticized Renault Samsung for not revealing the changes in an official announcement and switching the figures on its website. Some even speculated that Renault Samsung decided not to deliver the information out of the concern stemming from Hyundai Motor’s release of its newest Sonata, the main competition for the SM6 sedan, at lower prices. The new Sonata, which was released Wednesday in an already heated sector, starts at 22.5 million won. 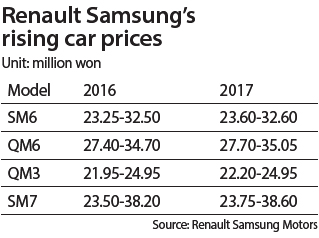 But the car manufacturer denied the allegations and said it has explained changes thoroughly to potential buyers.

“The allegation that we didn’t make official announcement just means we did not issue a press release about the changes,” a Renault Samsung spokesperson said on Monday. “But we did have a page on our website explaining the price difference between the 2016 models and 2017 models, not to mention the brochure we handed out to the customers.”

“Not just that, but for a month in February, we specifically told consumers about such changes when they visited our showrooms,” he added.

The spokesman said they rose its prices “because of the price hike of raw materials [such as metals] as well as the rise of distribution costs.”

Renault’s SM6 was introduced to the market in March 2016 and quickly became popular with the public, ranking second in the market last year after selling more than 57,000 vehicles. Its rival GM Korea also introduced an all-new Malibu last year, selling 36,658 cars.