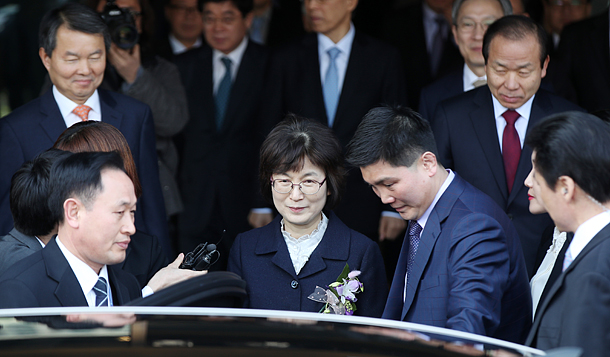 Lee Jung-mi, center, former acting chief justice of the Constitutional Court, leaves the office of the court in central Seoul on Monday after calling for unity and harmony in the nation in a speech at her retirement ceremony. [YONHAP]

A retirement ceremony for Lee, 55, was held at 11 a.m. at the Constitutional Court in Jongno District, central Seoul, where she described the unanimous decision on Friday to remove Park as “a truly painful and difficult decision.”

Before her six-year tenure came to an end, Lee announced the verdict to remove Park, a decision reached unanimously by the eight judges on the bench, in a ruling by the court broadcast on national television Friday.

The justices ruled that Park should be removed for allowing her close friend, Choi Soon-sil, to interfere in state affairs for private gain and for her abuse of presidential power, and condemned her for repeatedly lying to the public.

Lee was the youngest justice to serve on the Constitutional Court, which she joined in 2011. She was also the second-ever female justice to be tapped for the court and the only woman on the current bench. Lee also served as its acting chief justice twice, the second time since Jan. 31, after the retirement of Chief Justice Park Han-chul.

As she stepped down, Lee said the court “gathered all our strength in this decision in order to abide by the Constitution and rule of law and through a fair procedure realize the spirit of the Constitution.”

She added, “Though the pain may be great today, I believe that, rooted in our Constitution and the rule of law, we will head toward becoming a more mature democratic nation.”

Lee walked into the court with two pink rollers in her hair on the morning of the landmark ruling, earning laughs and sympathy from onlookers.

An Ulsan native, Lee is a graduate of Korea University. She passed the bar in 1984 and became a judge in 1987. Over her 30-year career, she also served as senior judge at the Daejeon High Court, Busan High Court and Seoul Central District Court.

She was appointed to the Constitutional Court in March 2011 by then Supreme Court Chief Justice Lee Yong-hoon, who took the office during the Roh Moo-hyun administration, and has been considered by experts to rule centrist or liberal.

Lee served as presiding judge when the Constitutional Court ruled to dismantle the left-leaning minority Unified Progressive Party accused of having links to North Korea in December 2014, considered a conservative decision.

The court has requested around-the-clock police security to protect Lee after her retirement because of concerns over potential backlash against her for the court ruling on Park.

There are now seven justices in the Constitutional Court, following the departures of Lee and Park.

Kim Yi-su, who has served in the Constitutional Court since 2012, was named as acting chief justice for the time being. He previously served as president of the Judicial Research and Training Institute and a chief judge in the Seoul Southern District Court.

Lee Seon-ae, a 50-year-old attorney at law firm Hwawoo and a former judge, has been named as Lee Jung-mi’s replacement, and will be the only female justice on the court.