Park’s denial will give a boost to Moon: experts

Park’s denial will give a boost to Moon: experts 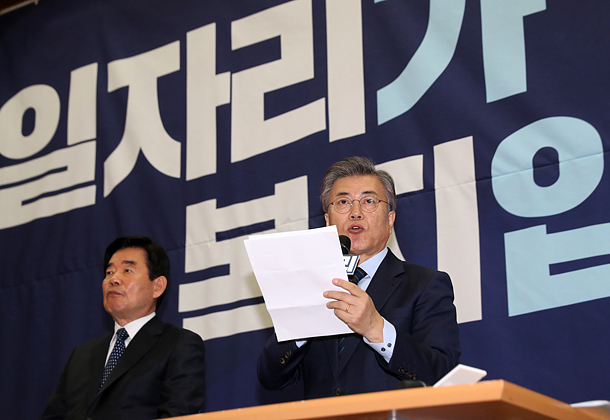 Moon Jae-in, right, speaks to the audience at a ceremony to launch the job creation committee for his campaign in the Center for Lawmakers in the National Assembly in Yeouido, western Seoul, on Monday. [YONHAP]

Former President Park Geun-hye’s refusal to accept the Constitutional Court’s ruling last Friday to remove her from power is becoming an issue that may weigh on the upcoming election.

The disgraced former leader’s brief statement, read by her Blue House spokesman Min Kyung-wook upon her homecoming on Sunday, said though it “may take time, the truth will eventually prevail.”

Park’s rejection of the court’s ruling broke two days of silence and has fueled speculation that an increasing number of people will see the upcoming presidential election as a judgement of the Park administration. With the absence of a president, a new election must be held within 60 days from the Friday ruling. May 9 is likely to be chosen as the election date.

Now attention is on which candidate will benefit the most from Park’s denial. Many experts point at frontrunner Moon Jae-in, since he has been calling for a hardline stance on Park and ruled out the possibility of reaching out to those who had advocated and worked for the ousted president, his formal presidential rival in 2012. Moon said their “sincere apology” and “self-reflection” on their part in the political fiasco should come first.

South Chongcheong Governor An Hee-jung, who trails Moon in second in most polls, may suffer from Park’s statement since the governor has maintained that he could form a coalition government by reaching out to members of the LKP, which lost its governing party status with Park’s removal, for the sake of restoring national unity and forming an effective government that can get things done through a coalition body.

The 52-year-old governor reiterated his stance on Monday. When asked about reaching out to the LKP, An said he was open to communicating with all political parties and factions even if their political visions differed from his. He pledged to form a coalition preparation committee right away if elected to begin discussions on forming the coalition government.

An’s position could work against him if the public mood toward Park further sours out of disappointment with her repudiation of the court’s ruling amid growing signs that she is trying to influence the upcoming election from her residence in Samseong-dong, southern Seoul.

Such signs stem from a lineup of LKP lawmakers loyal to Park tasked with assisting her in her forced retirement. A group of eight LKP lawmakers, including Suh Chung-won and Kim Jin-tae, are already being referred to as the Samseong-dong team.

Park’s statement and attempts to galvanize her supporters through the Samseong-dong team could lead to rising calls among liberal voters that presidential contenders from the opposition bloc maintain hardline stances against Park and the LKP, which could complicate An’s message for unity and a coalition government that embraces the LKP.

But with Park’s refusal to accept the ruling, the chances for such a shift appear low.

“Park’s message to the people has only deepened the public’s disappointment and betrayed their expectation that she would act presidentially,” Lee Hee-jung, professor of political science at Hankuk University of Foreign Studies, told the Korea JoongAng Daily. “Her statement has only underscored that there is a huge gap between Park’s perception and that of the public. It is deeply disappointing.”

The latest poll has not factored in Park’s statement so it remains to be seen how much impact it will ultimately have on the presidential runners.

In the latest poll by Korea Research, conducted on Saturday and Sunday of 2,046 adults nationwide, Moon leads with 29.9 percent of support, trailed by Governor An with 17 percent. Acting President Hwang Kyo-ahn came in third with 9.1 followed by Seongnam Mayor Lee Jae-myung with 9 percent.