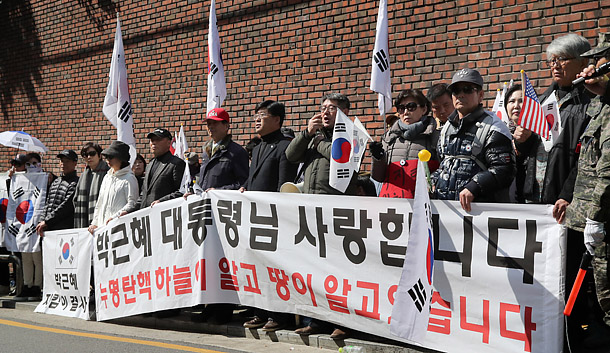 Dozens of Park Geun-hye supporters gather near her home in Samseong-dong, southern Seoul, on Monday to show their support for the former president. [YONHAP]

Civic activists, political parties and common citizens are expressing disappointment and even outrage at former President Park Geun-hye’s total lack of contrition as she left the Blue House and returned to her residence in Samseong-dong, southern Seoul, Sunday.

Civic activists who had called for Park’s resignation at candlelight vigils since last October in Gwanghwamun Square in central Seoul were particularly incensed at what appeared to be Park’s defiance of the unanimous ruling of the Constitutional Court on Friday removing her from presidency.

Two days later, Park departed from the Blue House Sunday evening, escorted by a motorcade, for her old residence in Samseong-dong, where hundreds of supporters awaited her holding national flags. She waved from the car, beaming, and went on to greet her most loyal aides and lawmakers before entering her home.

Her former presidential spokesman Min Kyung-wook, a lawmaker of the Liberty Korea Party, read out a four-sentence statement from Park immediately afterward.

“I feel sorry that I could not complete the mandate given to me as president,” said the statement. “I express my gratitude to people who have supported and trusted me. I will take all responsibility for these results. Though it may take time, I believe the truth will eventually prevail.”

These were Park’s only remarks since the historic ruling of the Constitutional Court on Friday upholding the National Assembly’s decision to impeach her for a corruption scandal involving her friend Choi Soon-sil.

One civic organization that has been demanding Park’s resignation, Bisang 2016, released a statement immediately saying, “When we see that you are closing your eyes to the fact that 80 percent of the people requested your dismissal and intentionally incite the few blindly supporting you in order to maintain that small authority, it confirms that it is a good thing you were driven out of office.”

The organization plans to hold a press conference Tuesday to demand a proper investigation into Park and for her to be summoned and prevented from leaving the country. Park is now stripped of the immunity from prosecution she enjoyed as president.

The Korean Confederation of Trade Unions said in a statement that, “President Park took the remarkable position that she will remain the president for a small number of pro-Park forces and her supporters. The time in which a suspect is granted freedom is time that enables the concealing and destruction of evidence.”

Lee Eun-jin, a 33-year-old merchant at a market in Daegu, told the JoongAng Ilbo Monday, “Though she was disgracefully kicked out of the Blue House, she was smiling brightly, which made me question whether former President Park understands the situation properly.” Daegu is Park’s hometown: she represented it as a lawmaker for five terms.

Choi Kyun-sang, a 35-year-old company employee from Seoul, said, “At the time of the ruling on the impeachment of former President Roh Moo-hyun [in 2004], Park called for him to ‘humbly accept’ the Constitutional Court’s decision. Her going against its decision now can only be seen as a mockery of the people.”

A group of around 20 university student councils held a press conference at the Gwanghwamun Square in central Seoul on Monday, and a spokesperson said, “Former President Park, who shows no repentance and instead is attempting to unite the conservatives, needs to be arrested.” They vowed to continue holding candlelight vigils including one on April 1 for college students.

All the major parties except the conservative Liberty Korea Party also expressed dismay at Park’s apparent rejection of the court’s decision.

“There was no message of acceptance, self-reflection or appeal for unity by the dismissed president till the end,” said Park Jie-won, chairman of the liberal People’s Party, at a Supreme Council meeting at the National Assembly on Monday.

The Democratic Party of Korea criticized the former president for putting herself over the people. Choo Mi-ae, head of the party, called upon Park to “comply with the prosecution investigation as a civilian and criminal suspect.”

Joo Ho-young, floor leader of the conservative Bareun Party, expressed “regret that she used a spokesman to leave behind a message of division and discord.”

Park’s supporters, including the lawmakers of the LKP and aides that greeted the former president at her Samseong-dong residence on Sunday, are setting up a team to help her.

The so-called Samseong-dong team will continue to support Park as she will not be given any of the special treatment afforded former presidents in the past because she was impeached.