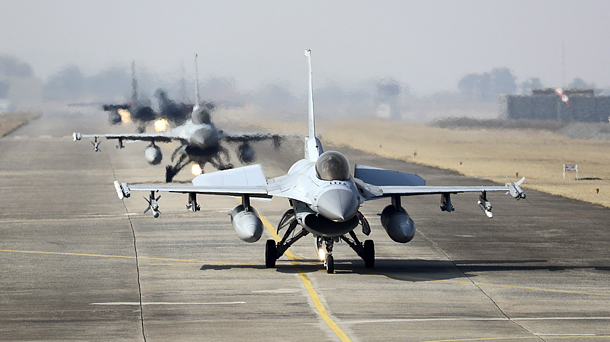 Fighter jets, participating in the Soaring Eagle drill, taxi on a runway in an air base in Cheongju, North Chungcheong, on Monday to take off in a tactical flight. [YONHAP]

The U.S. Navy’s Special Warfare Development Group, better known as SEAL Team 6, will arrive in South Korea soon for joint military drills and take part in an exercise simulating the removal of North Korean leader Kim Jong-un, according to the Ministry of National Defense Monday.

The counterterrorism unit is best known for its removal of Al-Qaeda leader Osama bin Laden in May 2011, known as Operation Neptune Spear.

It will be the team’s first time participating in the annual Foal Eagle and Key Resolve exercises, which will run through late April.

The ministry did not say when SEAL Team 6 will arrive. The Japan Times reported that the American unit boarded the USS Carl Vinson, a Nimitz-class aircraft carrier, last Friday and are currently training in South Korean waters.

The carrier will arrive in Busan Port Wednesday, according to the Japanese newspaper.

Also set to touch down in South Korea is Delta Force, a special mission unit of the U.S. Army whose main tasks include hostage rescue and counterterrorism, said the Defense Ministry.

Together with SEAL Team 6, they will practice removing Kim Jong-un and destroying of North Korea’s weapons of mass destruction.

F-35 stealth fighters will also fly from U.S. Navy bases in Japan this month and carry out strike simulations on key North Korean facilities. A joint amphibious landing operation, which will kick off next month, will see the deployment of the support ships USS Bonhomme Richard, USS Green Bay and USS Ashland.

Washington and Seoul stress that the annual military drills are purely defensive, although Pyongyang sees them as a rehearsal for an invasion. South Korea’s military said around 290,000 domestic soldiers and 10,000 U.S. soldiers will participate in this year’s drills, which by scale would be approximately the same as last year’s, the largest to date.