THE Asia summit kicks off today

THE Asia summit kicks off today 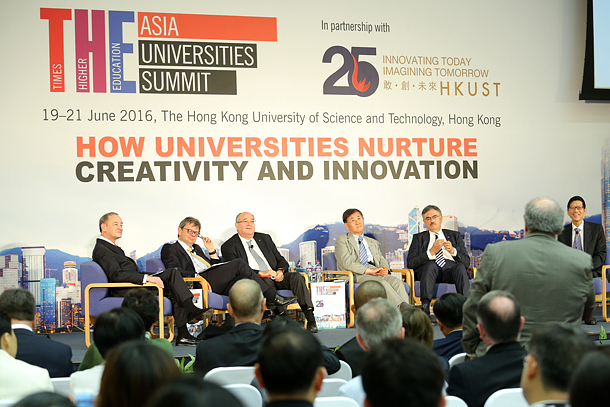 Panelists speak at the inaugural Times Higher Education’s Asia Universities Summit launched last June at the Hong Kong University of Science and Technology. This year’s summit will be hosted at University of Ulsan from Tuesday through Thursday, focusing on the convergence of academia and industry. [UNIVERSITY OF ULSAN]

The three-day THE Asia Universities Summit will kick off today at the University of Ulsan, bringing together global educational leaders to discuss collaboration between academia and industry in Korea’s industrial capital.

This year, over 200 leaders of higher education from 40 universities and about 24 countries are expected to attend the annual summit, in its second year, organized by British institution Times Higher Education (THE), to discuss the sustainable development of universities, technology and the economy.

Ulsan, which marks its 20th anniversary as a metropolitan city, is a co-host of this year’s summit, which has the theme “Forging the future - building stronger alliances between university and industry.”

On Tuesday, the first day, participants will have an opportunity to tour the Hyundai Heavy Industries shipyard, while Korean university heads will partake in a Presidents’ Roundtable, alongside seminars and a gala dinner hosted by Ulsan city.

The summit will be divided into five sessions with the themes of working together to empower research, creating industry links and enhancing value, returns on investment, the power of metrics and entrepreneurship and business start-ups.

The inaugural summit began last year from June 19 to 21 at the Hong Kong University of Science and Technology and brought together 260 delegates from over 25 countries with the theme “How universities nurture creativity and innovation.”

The University of Ulsan, a private institution founded in 1970, beat out other competitors, including schools in Tokyo, and was announced as the host of the Asia Universities Summit during the last conference.

“Holding this summit is an opportunity to verify the global presence of Korea’s rural private universities in the Asian university community,” said University of Ulsan President Oh Yeon-cheon, “and will provide a precious opportunity for Ulsan Metropolitan City to introduce itself as a new industrial engine.”

“As an international conference attended by global leaders,” said Ulsan Mayor Kim Gi-hyeon, “we hope this will be an opportunity to introduce to the world Ulsan’s charms through its ecology, culture and tourism and that this can lead to long-term foreign investment and development.”

It is also seen as an opportunity for companies based in the city, including Hyundai Heavy Industries, Hyundai Motor, SK Energy, Hanwha Chemical and Samsung SDI, to expand global economic cooperation and attract foreign investments.

Ulsan, with a population of 1.2 million and annual exports of around $100 billion according to the city, is the center of Korea’s petrochemical, automobile and shipbuilding industries.

It is also expanding into areas such as the convergence of ICT into the manufacturing industry, along with new materials and 3D printing industries.

This year marks the 20th anniversary of Ulsan attaining its status as one of Korea’s seven metropolitan cities. Last year it announced a set of 10 key projects to celebrate the 20th anniversary, including hosting a Korea-Japan-China regional government exchange conference and the 8th Asian Bird Fair.

It also announced nine other cultural, sports and education events it will be supporting as a part of the anniversary celebratory efforts, which includes the Asia Universities Summit and the Para-Badminton World Championships. The city this year aims to attract 4 million tourists as a part of its “Visit Ulsan” year, compared to 2.41 million visitors in 2015, and is in the process of carrying out 36 projects to meet its goal.

“Ulsan obtained the status of metropolitan city on July 15, 1997,” said Lee Eun-jin, an official with Ulsan city government in charge of the 20th anniversary projects, “and we have been working on projects to create a dialogue platform of the people marking the 20th anniversary, and cultivate a sense of pride and local patriotism in our residents.”